Sean McDermott plots route from Norway to Ireland’s No 1 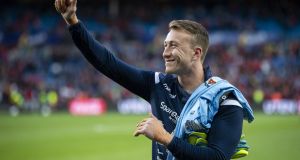 For a 26-year-old who spent no longer than six months in the country as a child, there’s a compelling bond between Sean McDermott and Ireland, evident in the manner in which he speaks of the country. His six months in Donegal as an impressionable youngster left a mark, but the indelible connection goes back to the passion of his father, Terence, which was passed on to the aspiring footballer as he grew up on the Norwegian coast.

When the Republic of Ireland qualified for the 2002 World Cup, nine-year-old McDermott and his brothers were glued to the television in Kristiansund, a harbour city spread across four islands that jut into the wild North Sea. Like youngsters of the same vintage in Ireland, Robbie Keane and Damien Duff were idols, their images adorned across bedroom walls in the McDermott household. In fact, when a decision was made to move back to Donegal for a year, it was embraced by the young goalkeeper and his brothers. There was no scorning and moaning about a life left behind. It was an adventure to be savoured.

“We all love Ireland,” insists the Kristiansund shot-stopper. “We love going there and we love the people.

“Even though I was only young, I wanted to move to Ireland, too, and my father wanted to try and live in Ireland for a year. It was nice to live close to my grandparents, playing football there and I was playing Gaelic football, too.

“But the guys who rented our house in Norway never paid the rent so we had to go back six months early.”

However, journeys back to Donegal are frequent. He was back in Mountcharles, a small village outside Donegal town, as recently as December. The sense of Irishness he continues to espouse has been fostered from his accumulated time in the northwest, thus leading him to declare for the Republic of Ireland, even if he considers himself Norwegian, too.

He joined up with Mick McCarthy’s side last summer in Portugal, ahead of their European Championship qualification fixtures against Denmark and Gibraltar, and remained with the squad throughout the international break as they continued their quest towards this summer’s tournament. Although he didn’t receive a cap, it solidified one of his primary career ambitions: owning the Irish No 1 jersey.

“[In 12 months’ time] I would like to see myself as a regular in the Irish set-up. And maybe not in one of the top-five leagues in the world, but somewhere like Belgium or Holland, Bundesliga 2, the Championship. One of these leagues.”

The stepping-stone image may be off-putting for some clubs, but Kristiansund is an outfit that sees its potential as a gateway club, where players can move on to greater things abroad. It’s an approach that isn’t uncommon in Scandinavia and, as it happens, is symptomatic of the mindset throughout the Norwegian system.

I’m playing well, so I think clubs are watching me because of what I’m doing here

“My club knows my ambitions and they know as well that I want to play at the very highest level. We have that relationship and that’s the kind of club they are. If a club comes in with a nice offer they’ll accept it. And it will give a good image to the club as well.

“This would be our fourth year in the top league so there’s a good vibe in the city. It’s a good place for me to be, to play games and show myself. We played Man United last summer, and I’m playing well, so I think clubs are watching me because of what I’m doing here.”

Healthy conditions, by all means, from which to prosper. While the Eliteserien, Norway’s top division, is a significant step down from some of the biggest leagues in Europe, McDermott still feels it’s “a step above” what is offered on the Irish domestic scene.

“I know about League of Ireland from watching teams playing Norwegian teams in the qualifying stages of the Europa League or the Champions League, but I think the Norwegian league can pay higher wages and put more money into their clubs.

“The likes of Dundalk might do well here, but this is a better level. They show every game on television. Rosenborg, when they’re doing well, will have a minimum of 20,000 at their games. Otherwise, I say averages would be about 8,000.

“If you come here and do well, you’ll get sold to a bigger club.”

At the moment, that’s the main ambition. And, with that, a coveted Irish cap may finally come his way. How quickly that happens is anybody’s guess, but it pays to be highly determined – even on the road less travelled.

Name Sean McDermott
Date of birth May 30th, 1993
Club Kristiansund BK
Country Norway
Hometown Mountcharles, Donegal*
Position Goalkeeper
*McDermott was born and has spent most of his life in Norway