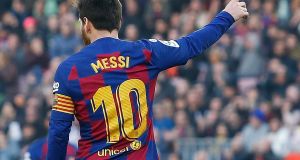 Lionel Messi says he has no intention of leaving Barcelona but has warned that they need to act after a month in which there has been “one problem after another”, and admitted that right now they are not good enough to win the Champions League.

The Argentinian also said that he felt “attacked” by the technical director, Eric Abidal, and described allegations that the club had employed an agency to create online accounts to defend the president Josep Maria Bartomeu and criticise players as “strange”.

Messi said he would “wait to see if they were true”. Bartomeu has described the accusations as “completely false”.

On his future Messi said: “I have said lots of times that my idea is [to never leave Barcelona], and as long as the club wants it, there won’t ever be a problem. Many times, I’ve had the chance to leave the club, there have been lots of clubs interested, clubs prepared to pay the buyout clause, but it never occurred to me to leave and it doesn’t now either.

“[But] I have also said many times that I would like the club to be in good shape, for the fans to be happy with the team we have, for there to be a winning project and for us to continue being candidates to win trophies like we always were. I want to win another Champions League, I want to keep winning league titles.”

There are significant doubts about their capacity to do that – as Messi expressed in a wide-ranging interview with El Mundo Deportivo. On Thursday Barcelona completed the signing of the striker Martin Braithwaite from Leganés for €18 million, after receiving permission from La Liga to register a player outside the transfer window.

“People are nervous,” Messi said, “but that’s normal because of everything we have experienced recently and because the team isn’t playing well either. The league is very up and down, we’re inconsistent and Madrid are too; a lot of points are being dropped, and I think we will be there. Then, it’s true that in the Champions League we have to keep growing, and a lot too, because the way we are right now I don’t think it’s enough to win the Champions League.

“We have to be more consistent in our play, take on board all the new things that we’re doing [with coach Quique Setién] and put them into practice as soon as possible, be more reliable, not make so many stupid mistakes . . . Since January, it has been problem after problem. What we need is calm, to be able to think about football.”

Messi also explained his decision to publicly call out Abidal on social media at the start of February, accusing him of tarnishing the players’ reputation when he laid the blame for the sacking of Ernesto Valverde at the dressingroom door and suggested that they do not work hard.

“I don’t know what went through his head to say that,” Messi said. “I responded because I felt attacked. I felt that he was attacking the players. Too many things are already said about the dressingroom, like that we control everything, that we choose the players and [what happens to] the coaches; and [it’s said] about me especially: that I have lots of power and decide things.”

Messi said he felt “annoyed” and “hurt” and “couldn’t let the sporting director attack me in that way”. He added: “It’s said a lot that I take decisions, that I run [the club], and that’s not true. I don’t know why [that gets said]. But it has been proven, I think, that I have my opinion and the club has its opinion and a lot of the time they are not the same and they don’t do what I say.”

In the latest damaging episode, on Monday Cadena Ser Radio reported that Barcelona had paid €1 million to hire a company called I3 Ventures which set up online media accounts to write stories defending the president and damage the image of some players and former players.

Barcelona denied the accusation, saying that they had hired I3 to “monitor” social media, but not to attack anyone. Faced with further evidence, they ended their relationship with the company and said they would investigate. Bartomeu also met with the club captains. – Guardian