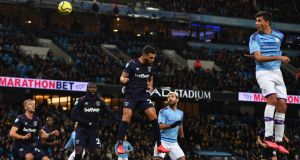 Manchester City 2 West Ham 0
Some good news at last for beleaguered Manchester City – Liverpool’s lead at the top of the Premier League has been cut to 22 points.

Otherwise this was the sort of evening you expect when a game has been rearranged in the middle of a rest period with matters a little more pressing than the destination of this season’s title on the home side’s minds. City performed well enough to win without pulling up any trees.

Raheem Sterling was absent, Sergio Agüero quiet, and though Kevin De Bruyne was excellent he was bound to stand out in such a low-intensity contest.

West Ham played as David Moyes’s many detractors predicted they would play, as if they never entertained the possibility of winning the game. They left with exactly what they deserved, presumably to try and take enough points to climb out of the bottom three from clubs in the lower half of the table. It will be interesting, to say the least, to see how Moyes approaches Monday night’s game at Liverpool.

The outcome was never seriously in doubt once City took a first-half lead through Rodri, because even before De Bruyne doubled the advantage West Ham did not show enough attacking intent to persuade anyone that a comeback might be on the cards.

City should have been in front after just six minutes, when a typically precise David Silva pass found Gabriel Jesus not only onside but one-on-one with Lukasz Fabianski. The striker might have scored with a first-time shot but instead he tried to walk the ball round the goalkeeper to make sure, found Fabianski less obliging than he had anticipated and ended up being dispossessed by Ryan Fredericks.

By way of making amends Jesus powered through the middle a few minutes later to set up a shooting chance for De Bruyne, whose well-struck drive came back off Fabianski’s legs.

With Agüero dinking a speculative shot narrowly wide it soon became clear that the only question would be how long West Ham could hold out. They were given another reprieve when Jesus was played onside by Issa Diop to allow another close-range shooting chance. A goal looked certain, or at least another test of Fabianski’s reflexes, but Aaron Cresswell recovered well to get a foot in the way. The defender inadvertently put a hand on the ball as he stumbled in the challenge, but a more convincing case for a penalty was waved away on City’s next attack.

Agüero was in on goal and just about to show Jesus how to finish when he found he could not reach the ball due to Angelo Ogbonna pulling him back. The referee was in line and could not form a clear enough view of the incident to award a penalty, though Agüero was bitterly disappointed when the assistant on the touchline simply indicated play on.

After their frustrating experience in the 2-0 loss at Tottenham in their last outing, City could only be worried when the clock began to tick towards the half hour with the scores still level. Their efforts from open play had not been fully convincing but the deadlock was broken from a set piece.

A De Bruyne corner was gracefully headed into the far corner by Rodri, with Aymeric Laporte following in to get a superfluous touch as the ball crossed the line. Even though West Ham had three centre halves in the box, both the City defenders reached the ball first.

Jesus finally hit the target five minutes before the interval, only to see Fabianski make a comfortable save, and though West Ham seemed to have been defending the whole time there was a hint of adventure on the stroke of the interval when Michael Antonio flashed a ball across the face of goal with Robert Snodgrass just unable to reach it.

City opened the second half with intent, Kyle Walker showing all his pace to reach a probing pass from De Bruyne, with the West Ham defence just managing to keep out Agüero at the near post. The Argentinian had a better chance after an hour, again when found by De Bruyne, but he took the ball too wide and ended up missing the target.

Pablo Zabaleta made a popular return when what might euphemistically be described as a shoulder charge by Rodri left Fredericks unable to continue, and until De Bruyne added a second goal there was little else for the crowd to get excited about. The Belgian began the move that led to City’s clincher, then after Bernardo Silva had turned Cresswell inside out he appeared at his team-mate’s shoulder to take over and score.

Silva might well have scored himself, but by this stage De Bruyne was not in a mood to take any chances with his colleagues missing chances. Just as well too, for when Jesus stayed onside one more time before the end, he hit Fabianski once again with a shot from point-blank range. – Guardian