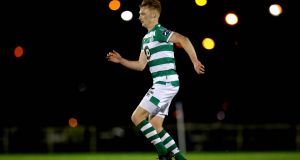 Shamrock Rovers do not want to be without Liam Scales and Neil Farrugia when they are on Under-21 international duty. File photograph: Inpho

Shamrock Rovers have formally requested that Saturday week’s top of the table clash with cross city rivals Bohemians be postponed as two of their players, Liam Scales and Neil Farrugia will be on Under-21 international duty.

The FAI has yet to formally announce any decision on the request but it is seen as a formality that the game will not now go ahead as had been scheduled on the day before Ireland take on Finland at the Aviva stadium.

Bohemians will also be affected by the Under-21 training camp intended to allow recently appointed manager Jim Crawford to work with his squad ahead of European Championship qualifying games against Italy, Iceland and Luxembourg in October and November.

Ireland, who were managed by Stephen Kenny through the opening part of the campaign, currently lead their group by three points although the Italians, who currently lie second, have two games in hand.

Although they had yet to take any action in relation to the league game, Bohemians players Danny Grant and Danny Madroiu are also set to be away with the squad for a number of days.

Manager Keith Long said he had no issue with the game being postponed in the circumstances although he feels the scheduling should not have been allowed to become an issue in the first place.

“They got their first,” he said. “But it’s perfectly understandable. Neil Farrugia and Liam Scales are playing in their team and I have no issues that Rovers want to postpone the game because we’re in the same boat ourselves.

“The two Dannys for us will be away on training camp with the 21s all week. They would probably end up coming back with us for the Friday session before a Saturday kick-off which would be far from ideal.

“It’s just a situation that should never happen,” he continued. “Because we’re such a young league, and this is the point, you’re going to have these players in squads and being drafted into squads at U-21 level and U-19 level, which you can’t postpone games for. I think you have to make allowances in your calendar for international windows, it’s not rocket science.

“I’m not blaming the FAI for it either. It’s an imperfect situation that we’re in but when you’re doing your calendar season, account for the international windows. If there was an Under-19 camp this week or next week we would probably have Dawson Devoy and Ross Tierney gone as well and that’s four players possibly gone from your first-team squad. That would be hard to deal with. The younger the player you have in your group, the harder the impact. But I can fully understand why Rovers called it off.”