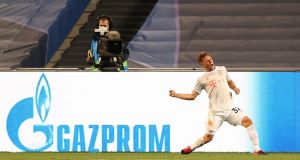 While the opportunities are slipping away for Lionel Messi, the possibilities feel endless for Bayern Munich. The only surprise was that Robert Lewandowski took until the 82nd minute for his customary goal. Otherwise the game played out as expected: Bayern Munich were far too cohesive to be denied a place in the Champions League semi-finals by Barcelona, who look a team in dire need of renovation.

Five years have passed since Messi, whose head had dropped long before full-time, last won the Champions League. The end of an era is approaching for Barcelona and the decline was epitomised by Messi losing possession before Philippe Coutinho made it 7-2 to Bayern.

The scoreline did not flatter Bayern, who will face Manchester City or Lyon next, and there was still time for Coutinho to add an eighth against his parent club. The Brazilian must have been glad to be wearing the colours of Bayern, who will be dreaming of a treble after romping through in Lisbon.

Messi’s characterisation of Barcelona as a weak team who shrink when confronted by pace and intensity proved spot on from the start. For all that they rued missing a series of excellent chances when the game was locked at 1-1 and lurching from end to end, the reality is that they never looked capable of living with Bayern and were staring humiliation in the face long before half-time.

Barcelona were a team of contradictions: beautiful on the ball but painfully brittle without it. Although they threatened to land the first blow when Sergi Roberto’s deflected low cross forced Manuel Neuer to scoop the ball away from Luis Suárez, it did not come as a surprise when Bayern scored from their first proper attack. There were four minutes on the clock when Ivan Perisic, breaking into spaca vacated by Nelson Semedo on the left, lifted in a cross for Thomas Müller, who exchanged a gorgeous volleyed one-two with Robert Lewandowski before stroking a fine finish beyond Marc Andre Ter Stegen.

At least there was a brief response from Barcelona, who were bright in attack despite leaving Antoine Griezmann on the bench. Quique Setien’s decision to drop Griezmann and switch to a 4-4-2 system unsettled Bayern at first and there was hope for Barcelona whenever Messi, dropping deep to pick up possession, was on the ball.

Barcelona had spotted that Bayern’s high line was there for the taking and they equalised after seven minutes. A straight long ball released Jordi Alba, who hurtled behind Joshua Kimmich on the left and crossed for Suárez. David Alaba moved in to intervene, only to slice a comical clearance over Neuer and into his own goal.

Suddenly Barcelona looked like the least convincing underdogs of all time. They broke again, Semedo slipping a pass through to Suárez, who just failed to lift his dink over Neuer. Sergio Busquets missed a cross from Messi and watched the ball bounce off the post. Messi dribbled in from the right, cut on to his left and aimed his shot too close to Neuer, who gratefully fell on the ball.

Bayern were vulnerable, with Semedo causing problems as he flew forward from right-back to support Messi. Yet Barcelona never convinced at the back. Lewandowski sent a warning shot over and the Germans regained the lead when they pressed high, taking advantage of Barcelona’s shoddy attempts to play out from the back. Sergi Roberto dithered in a dangerous area and Serge Gnabry pounced, robbing the midfielder and releasing Perisic, who drove in a low shot with his left foot.

Barcelona collapsed, conceding again when Leon Goretzka lifted a clever pass over the top for Gnabry. The attempts to play offside were a joke and Gnabry, so direct and decisive, slammed a low shot past Ter Stegen.

Memories of Barcelona’s capitulation against Liverpool in last year’s semi-final came flooding back. Bayern, a functioning unit, were far too strong for this collection of confused and unhappy individuals. They were merciless, too. After 31 minutes Kimmich joined in an attack and crossed for Müller, whose second goal of the night all but killed the game as a contest.

Not that Bayern were flawless. Whoever faces them in the last four will have spotted a defence that can be pulled out of shape with enough persistence and quality. Barcelona, who threw on Griezmann at half-time, continued to create chances and they pulled a goal back in the 57th minute. Suárez dropped a shoulder to fool Boateng before sliding the ball past Neuer.

Yet there was no way back for Barcelona. Six minutes later Alphonso Davies, Bayern’s wonderful left-back, surged into the area after duping Semedo. There was no attempt at a challenge from Gerard Piqué, a centre-back in the throes of decline, and Davies was free to present Kimmich with an open goal.

It would be misguided to pin this all on Setien, who will be lucky not to be sacked. With 15 minutes left Bayern sent on Couinho, who joined Barcelona for £105m in 2018, to create Lewandowski’s goal. The Brazilian, on loan at Bayern, symbolises the money wasted by Barcelona and how they have let Messi down. – Guardian