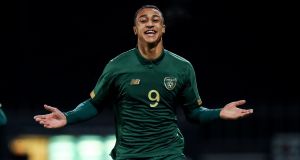 Norwich striker Adam Idah has been named in a 23-man Republic of Ireland squad for the Nations League games against Bulgaria and Finland. Photograph: Ryan Byrne/Inpho

For all the sense of anticipation, the inclusion of a couple of uncapped players was about as radical as it was ever going to get as Stephen Kenny named his first senior international squad. And on the face it there is next to no controversy involved in the selection of Jayson Molumby and Adam Idah, although Michael Obafemi may well, it seems, have a different take on that.

To anyone hoping for a revolution, the announcement may have been a disappointment. Cases of varying strength could have been made for getting the likes of Dara O’Sea, Will Smallbone or even Connor Ronan involved and there is nobody from the League of Ireland with Jack Byrne currently on standby.

In reality, though, Martin O’Neill and Mick McCarthy both used expanded squads to distract from the consistency and, for many, conservatism of their core selections. There are, on the other hand, early signs of evolution here in a 23-man group picked to contest two competitive games of huge importance to the new manager and the suggestion of more to come if things go well next month. The basics of the Irish player pecking order have not completely changed, though, just because the manager has.

Kenny will want the under-21s to complete the job of qualifying for a first ever European Championship at that level and be happy to see Jim Crawford bring the likes of O’Shea, Conor Masterson and quite a few others on a little further while hoping they continue to get game time at club level so as to give him option in key areas.

Having talked about Ireland’s existing defence being one of the 10 best in Europe, however, and restored Harry Arter and James McCarthy to midfield, there were not a whole lot of vacancies.

One was created for Molumby who showed exceptional promise over the course of a strong Championship campaign on loan with Millwall and it is no great surprise given the team’s strike-rate in recent times that the greatest changes have come up front.

Kenny was hugely positive about Idah’s potential, suggesting that the 19-year-old who made a dozen Premier League appearances for recently relegated Norwich over the course of last season combined pace and physical presence in a way that no other Irish striker had for quite some time.

Troy Parrott, he admitted, had only really been included because David McGoldrick is not 100 per cent fit and will not travel to Bulgaria. The Dublin-born teenager, the subject of so much hype and expectation, has just gone on loan himself at Millwall and will hopefully start to play a lot more senior football next season. It is his style of play that got him into this squad with Kenny pointing to the similarities in the way Parrott and McGoldrick look to provide a focal point to the team’s attack and then bring players around them into things.

The new manager’s reasoning seemed sound but some aspect it, or the wider selection, upset Obafemi who initially seemed to suggest he thought the squad as named was “disgraceful” before thinking better of it and opting for the more moderate social media message of “interesting”. The young striker, though, also changed his profile picture from one of him playing for Ireland to one from a club game instead.

Kenny, seemed to take it all very much in his stride, observing benignly that Southampton’s fairly regular use of Obafemi in a two-man strike force has left the player with a little bit to learn about the role required with Ireland but, he insisted: “I see him as a striker, someone who hopefully has a big future with Ireland.”

It might be that after so much talk of the new man coming in to transform the team, Kenny’s first job will be to manage expectations among one or two of those who see themselves as members of a generation whose time, they might well believe, has come.