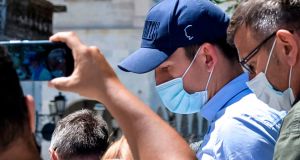 Harry Maguire is eager to be selected on Tuesday by Gareth Southgate in the England squad to face Iceland and Denmark early next month, because he believes he is in the right frame of mind to play despite the scandal that has built around his arrest and trial for “serial bodily harm” and “serial insult” in Greece.

Southgate has been forced to think deeply about whether to call up Maguire, normally an automatic pick, in the wake of the drama in Mykonos on Thursday night when the Manchester United captain and some of his friends became embroiled in a violent argument with a group of tourists outside a bar. Greek police officers were then involved, with Maguire alleged to have attacked one of them. He denies this and all the charges.

Maguire’s story took its latest twist on Monday when it emerged at least two officials had tested positive for Covid-19 in the building that houses the courtrooms on Syros, where the defender is due to be tried on Tuesday.

The player is not expected to be present at the hearing, having been cleared to leave Greece after appearing before a public prosecutor on Saturday. He will be represented by his legal team. Maguire’s brother Joe, also a footballer, was arrested after the street fight, together with a third man described by police as a friend, and they hope to clear their names, too.

There were doubts on Monday whether the hearing would take place after authorities confirmed emergency testing of staff who had used the courtroom premises was under way.

The island’s deputy mayor, Nikos Pitaoulis, has been diagnosed with Covid-19 along with the director of the municipality’s finance department. “The courthouse is on the ground floor of the building that also houses the town hall where two people have tested positive for the virus,” a local source told the Guardian newspaper. “The national public health organisation has decided that every employee must now be tested so there is a good chance the hearing will be adjourned.”

Maguire’s lawyers are understood to be making their preparations in the expectation that the hearing will go ahead as scheduled.

The police on Mykonos who were called to break up the brawl initially levelled charges against Maguire and the other two of “violence against officials, disobedience, bodily harm, insult and attempted bribery of an official” – after they allegedly attempted to resist arrest. They put out this statement before Maguire had been before the prosecutor.

The charge of bribery was dropped when defence lawyers argued the police had misconstrued Maguire’s attempts to find out what fines were likely to be in store under Greek law. The charges Maguire is facing are misdemeanours rather than more serious felony charges. Maguire has denied them all.

Under Greece’s penal code misdemeanour crimes can be converted, in the event of conviction, into financial penalties with defendants being allowed to pay off sentences as part of government efforts to ease overcrowding in prisons. If Maguire were found guilty by the three-member panel of judges on Syros he could go to an appeals court.

Southgate, who has always taken a dim view when any of his players draw unwanted attention to themselves, has a raft of other dilemmas to consider before he names his squad at 2pm for the games on September 5th and 8th.

There are logistical concerns in terms of where his players have been on their holidays and whether any destinations would put them at risk of testing positive for coronavirus or necessitate a period of quarantine.

It was revealed on Monday, for example, that Raheem Sterling, the Manchester City winger, had been at Usain Bolt’s 34th birthday party in Jamaica; Bolt is self-isolating after taking a Covid-19 test. It is likely Sterling will need to be tested on his return to the UK.

There are tensions with the clubs, particularly Manchester United, Manchester City and Chelsea – who finished their seasons on August 16th, 15th and 8th respectively because of involvement in the European competitions – over how many minutes their players ought to play. The window comes at an unusual time before the Premier League season has kicked off. And there are questions over the balance of the squad; in other words, should Southgate blood more youngsters or stick with the established players.

Southgate is expected to hand a first call-up to City’s Phil Foden while Aston Villa’s Jack Grealish and United’s Mason Greenwood are also in his thoughts. City’s Kyle Walker could get a recall. Jordan Henderson, Alex Oxlade-Chamberlain, Ben Chilwell and Luke Shaw are out injured. - Guardian