When the worst moments are so close to being the best, you keep on believing 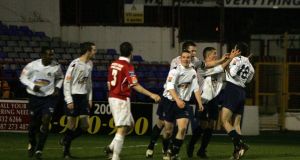 The thing about worst sporting moments is that you never know how long they’re going to be the worst for. In the split second when the ball hits the back of the net or the point goes over the bar it feels like nothing could ever possibly make you feel worse.

Obviously that’s far from the case; we are, after all, only talking about sport here so, you know, life and death does just about shade it in terms of the actual importance of these moments.

But even still, there aren’t many things that provide that instant feeling of crushing disappointment of an injury time winner on a freezing cold night to deny your team promotion or the penalty shootout loss in a cup final or, indeed, any of the numerous calamities along the rollercoaster journey that was following Shelbourne up and down the country in the Airtricity League First Division for 11 seasons.

But before we take that trip down misery lane, let’s put some context on it. When my dad first brought me to Tolka Park – a 3-1 win over Kilkenny City in 2001 – Shels had just won the double the season before and would go on to win four out of the next six league titles.

They were the glory years for the Reds – capacity attendances at Tolka Park, European football every year and the “worst” thing that could happen was to see Bohs nick the Premier Division in 2002/03, denying Shels what would have become four league titles in a row.

The high point came with Dave Rogers’ volley at Tolka Park to see off Hajduk Split and send Shels into the third qualifying round of the Champions League in 2004 – still the only Irish club ever to get so far.

As a 10-year-old, sitting in the old Lansdowne Road with 25,000 other people watching this team from Drumcondra draw 0-0 with Deportivo La Coruna (who, only two months previous, had been in the semi-finals of the Champions League) it seemed as if nothing could ever go wrong.

The second leg 3-0 defeat was disappointing but, for a 10-year-old child anyway, this felt like it was only the start. With Ollie Byrne in the directors’ box and Pat Fenlon in the dugout, the sky was the limit for Shels.

Months after the defeat to Deportivo, Byrne would pull off one of his masterstrokes by going a mile up the road to Dalymount Park and signing Glen Crowe, Colin Hawkins and Bobby Ryan. Even Bohs’ best players wanted to play for Shels. Domestic domination beckoned.

And then the wheels came off.

A 13th league title came in 2006 but all was not well. As a 12-year-old, understanding the economics of how unsustainable it is for a football club to be run on millions of borrowed euros wasn’t going to be easy, but even then it was clear that the dream was falling to pieces.

The debts were reaching the €10 million mark and the money wasn’t there to repay them. There are countless examples of how unsustainably the club was being run but one in particular stands out. In 2006, as Shels closed in on the league title, the players hadn’t been paid in four weeks and it looked like the game was up until Byrne came into the dressing room after a match and handed Fenlon a rucksack stuffed with £20,000 in cash to divide among the players. The only issue was that the money was in sterling.

Byrne had led Shels on a rollercoaster ride but the structure beneath the cart was ready to crumble at any moment. In the excellent podcast documentary ‘Never Ignored: Ollie’s Reds’, produced by Eoin Brennan, current Shels chairman Joe Casey ponders whether it was all worth it: “Anything he did, it wasn’t for him, it wasn’t to line his pocket. It was for the benefit of the club so you stayed in with him because of that. Was it worth the ride? I don’t know, I’m not sure.”

By February of 2007 Shels had no manager and Jim Crawford – now Ireland under-21 manager – was the only senior player at the club. Byrne was ill in hospital and would pass away six months later while, for Shels, extinction beckoned.

Only for the miraculous efforts of a few people behind the scenes and the work of Dermot Keely – who was appointed manager on February 23rd and cobbled together a full playing squad in the space of a few days with virtually no money – did Shels manage to secure a licence to play in the First Division in the 2007 season and avoid joining the list of disappeared Irish football clubs.

And so, on March 9th 2007, my dad and I took our seats behind the Drumcondra End goal in Tolka to watch a team of players we’d mostly never heard of draw 2-2 with Kildare County. It was only three and a half months previous that we’d stood on the same pitch to watch Owen Heary lift Shels’ 13th Premier Division title after a 2-1 win over Bohs.

How quickly things had changed. And little did we all know of what was to come over the next 12 years. Just when you thought you’d seen the worst moment it only got worse again.

A 4-0 defeat to the now defunct Monaghan United in June of 2007 was certainly a low point and another reminder of how quickly things had changed given that, just a year previous, the Reds had been in the middle of an eight-game winning streak at the top of the Premier Division.

But the worst moments undoubtedly come when you’re so close to some of the best moments. It was the following season, in 2008, that Shels went into the final day of the season needing a win over Limerick 37 to win the First Division and end their top-flight exodus after just two seasons. Leading 1-0 going into injury time it looked like the resurrection had come sooner than anyone expected.

But then, with the last kick of the game, Colin Scanlon drilled a low equaliser past Dean Delany to snatch a draw for Limerick and condemn Shels to second place in the First Division in a season where only the league winners were promoted.

The vision of that ball hitting the back of the net in the Ballybough End and the complete silence of the 2,000 people present will never be forgotten.

Similar disappointment would follow with a playoff loss to Sporting Fingal in 2009 and missing out on the playoffs by a point in 2010.

Even in 2011 when promotion was secured it ended in disappointment after a Graham Cummins header in injury time snatched the title for Cork while a penalty shootout defeat to Sligo Rovers in the FAI Cup final denied what would have been one of the greatest moments in this Shels-supporting odyssey.

Roll forward two years and we get to another one for the worst moments list. After making it back to the Premier Division in 2011 any Shels supporter would be forgiven for thinking that the First Division days were over but not so.

Trust me when I say there are few things stranger and more dispiriting than standing among just a few hundred others in the top tier at the 25,000 capacity Thomond Park (where Limerick played while Markets Field was being built) to watch your team be relegated after a 1-0 loss.

As the years go by in the First Division faces disappear, attendances dwindle and the dark nights in Wexford, Cobh, Ballybofey, Athlone and wherever else become indistinguishable.

The inevitable playoff loss to Galway in 2014 in sideways rain at Terryland Park is another one that gets lost in a sea of disappointing moments while the playoff defeat to Drogheda in 2018 stands out as a particularly hard one to take after going into the second leg 1-0 up on aggregate before having two players sent off in the first half only to miraculously force it to a penalty shootout.

That was a difficult one given the circumstances but after a while you become fully on board with the idea that Shels and heartbreak just go hand in hand.

After taking so many knocks it would be easy to call it a day and find something else to do on a Friday night but, when the worst moments are so close to being the best moments, you know the dice will roll the right way at some point to make it all worth it.