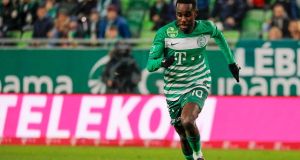 Tokmac Nguen will be the key man for Celtic to watch out for when they take on Ferencvaros. File photograph: Getty Images

Celtic host Ferencvaros in the Champions League on Wednesday and the one-legged tie is the second of a potential four qualifying rounds Celtic will face to reach the group stages. Here is the lowdown on their Hungarian opponents.

Like Celtic, Ferencvaros enjoyed their European peak in the 1960s and 1970s. The Budapest club won the Fairs Cup in 1965, beating Manchester United in the semi-finals and Juventus in the final. They lost to Leeds in the 1968 final and were European Cup Winners’ Cup runners-up in 1975. But they have only reached the Champions League group stages once, in 1995-96, and last season was only their second time in the Uefa Cup/Europa League group stages.

They only lost once in six matches but finished third behind Espanyol and Ludogorets. The Green Eagles’ previous visit to Scotland in 2004 proved eventful — Hearts boss John Robertson kicked out at opposite number Csaba Laszlo — a future Jambos boss — after a 1-0 away win at Murrayfield.

Former Dinamo Kiev striker Sergei Rebrov was a key player for Ukraine and the highest goalscorer in his country’s league but endured a difficult spell in England with Tottenham and West Ham. The 46-year-old continued his success with Dinamo Kiev as a manager, leading them to two titles and the knockout stages of the Champions League. He took over Ferencvaros two years ago and has led them to consecutive Hungarian titles for the first time since the mid-1990s.

Ferencvaros opened their league campaign with a 1-1 derby draw against MTK on August 14th. They then beat Swedish champions Djurgarden 2-0 at home to set up their trip to Glasgow and had a free weekend in the Hungarian championship to prepare.

Tokmac Nguen scored both goals in the first qualifying round, winning the ball before netting from long range for the opener and showing good pace and composure to finish the second. The 26-year-old, who also netted against MTK, is a particular danger cutting in from the left and using his right foot. The former Norway youth international, who was born in Kenya to South Sudanese refugee parents, was handed his first-team debut at the age of 17 for Stromgodset by future Celtic boss Ronny Deila.