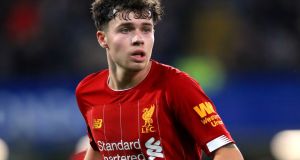 Neco Williams and Ben Cabango have been handed first senior Wales call-ups for the Nations League games against Finland and Bulgaria as Hal Robson-Kanu returns to the international scene. File photograph: PA

Neco Williams and Ben Cabango have been handed first senior Wales call-ups for the Nations League games against Finland and Bulgaria as Hal Robson-Kanu returns to the international scene.

Manager Ryan Giggs has named a 26-man squad for the September double-header, with Gareth Bale included after being frozen out by Real Madrid and playing only 48 minutes since Spanish football returned in June after its coronavirus lockdown.

Liverpool full-back Williams, who would have been called up for the cancelled March friendlies against Austria and the United States, is included for the first time after his breakthrough season at Anfield.

The 19-year-old — who won a Premier League winner’s medal after making six league appearances last season — has been capped by Wales at Under-19 level, but also qualifies for England through his English grandparents.

It had been reported that England manager Gareth Southgate was monitoring Williams, but it now appears as if the Wrexham-born defender has nailed his colours to the Welsh mast.

Swansea centre-half Cabango is also rewarded for a breakthrough season in the Sky Bet Championship when he made 21 appearances and helped Steve Cooper’s side into the end-of-season play-offs.

The 20-year-old is joined by Charlton midfielder Jonathan Williams and Bournemouth forward David Brooks, who both return after injury, and West Brom striker Robson-Kanu who retired from international football two years ago.

Robson-Kanu, a goalscoring hero at Euro 2016, won the last of his 44 caps against the Republic of Ireland in October 2017. He has not played under Giggs and told the former Manchester United star in August 2018 that he wanted to quit international football and focus on his club career.

But Robson-Kanu reversed that decision late last year and Giggs has now included him in his plans with the postponed 2020 European Championship just over nine months away.

Veteran defenders Chris Gunter, Wales’ most capped player with 96 appearances, and Ashley Williams are both retained despite both being without a club at present. Chris Mepham, Joe Allen and Joe Rodon miss out through injury.

Neil Taylor, Regan Poole, Sam Vokes and Tom Lawrence were in the squad which secured Euro 2020 qualification last November but do not feature this time.

Meanwhile Lyndon Dykes will be given the chance to commit himself to Scotland after being handed a call-up by Steve Clarke.

The QPR forward is also eligible to represent Australia, having been born on the Gold Coast, but Hampden chiefs have been assured the 24-year-old sees his future with the country of his parents’ birth. They both hail from Dumfries.

And Dykes could be pulling on a dark blue jersey as early as next month, having been named in Clarke’s squad for the Nations League double header against Israel and the Czech Republic.

Dykes, who recently completed a transfer from Livingston to Loftus Road, has been included alongside Livi goalkeeper Robby McCrorie, who is on loan from Rangers and has also received a maiden call-up.

Ryan Fraser is the most noticeable absentee. The former Bournemouth winger has not played since before lockdown, having rejected the chance to extend his Cherries contract to allow him complete their Premier League campaign.

But striker Lawrence Shankland is involved, despite having missed Dundee United’s last four games with a leg muscle issue.