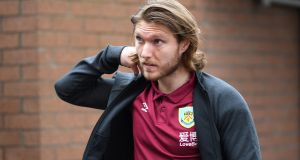 Republic of Ireland international Jeff Hendrick has signed a four-year deal with Newcastle, the Magpies have announced.

The 28-year-old, who was out of contract a Burnley at the end of last season, has joined their Premier League rivals after making 139 appearances for the Clarets.

Hendrick, who was named in the Ireland squad for next month’s Nations League clashes with Bulgaria and Finland on Monday, told NUFC TV: “It’s a massive club and playing over the years, going to the stadium, it’s one of the best stadiums to play in, so I just want to get playing there.

“I’ve had over 100 games in the Premier League, but I want to keep going and keep improving with a different team. It’s going to be different for me, the demands with the bigger stadium, the crowd, how big the club is, so I’ve got to take that on and keep pushing myself and striving to get better.