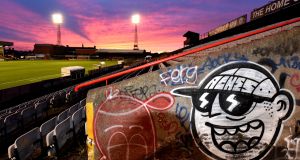 Dalymount Park: the glacial pace at which the redevelpment project is progressing provides a pretty good sense of where such projects sit in the political priority list. Photograph: Ciaran Culligan/Inpho

Improving on-field standards has helped to generate high expectations around the game for the new Airtricity League season but the progress made off of it may prove to be of far greater long-term significance.

The turmoil of the last year has helped to spark a debate about the importance of football to the country and just how much it should be getting from the public purse to support the good it does.

If there is going to be substantial change for the better over the long term, though, the senior clubs are going to have to show they are capable taking control of their own future while Niall Quinn and co. are going to have to persuade Government to help fund it. Over the next three days, we will look at some of the challenges facing the league of the eve of a new campaign.

It is a decade and a half since then FAI chief executive Fran Rooney suggested that €30 million or so was needed in order to give clubs the sort of stadiums that would enable them to broaden their appeal and compete more effectively for paying customers with other forms of entertainment.

The man now fronting up Finn Harps’ long-running attempt to secure a small portion of that amount in order to build their new home in Stranorlar reckons the equivalent figure now is €200 million.

Paul McLoone could scarcely be described as a League of Ireland lifer. He was, he says, a Harps supporters in his “younger days” but for most of the past three years he has been a key figure in the club’s campaign to get the stadium built after making that most rudimentary of errors: speaking up at a public meeting.

He was then, he suggests, and remains now, it is entirely clear, exasperated by the apparent failure of those in power to fully appreciate what he regards as the strength of Harps’ case for some €6.7 million in funding.

“That’s for phase one,” he says. “We have said we will do phase two [requiring an additional €5 million investment] ourselves.”

It is not, though, as if he only has eyes for a new Donegal stadium. A former senior civil servant and chief executive of North West Tourism, McLoone describes the €200 million figure as an “educated estimate” and feels that that too would be money well spent.

“That would give you 20 good stadiums, good academies and facilities for women’s football,” he says. “If you look at England, the government there decided post-Hillsborough that they were going to help make stadiums safe; that they had no choice.

“Now, we need the same sort of political will here in order to provide facilities for our young players, to equip clubs so that they can provide alternative to them going away aged 16 post-Brexit as well as the ability to develop players for our future senior national teams.

“It would send a strong signal that football in this country is going to move up a notch or two and give young people the opportunity to play football at a decent standard here rather than going to the Scottish second division. In terms of a business it would mean we could develop players. At the moment we are not in a position to encourage them properly to develop their skills.”

If that sounds primarily like the case from the clubs’ point of view; McLoone is adamant that the money is not unreasonable from a public perspective.

“It has to be about developing an approach to having better lifestyles, improved physical and mental health. Sport can be a key part of that; factually it is going to cost money but the benefits far outweigh the costs

“If you were building a road from Ballybofey to Donegal Town you would spend that sort of money. It’s not off the scale; it just needs to be viewed strategically.”

The sceptics, and there are clearly many of them, would argue that if you spent that sort of money on a road between any two given points, you would be left with a road afterwards. Traditionally, the League of Ireland has not been all that good at making its case and though Harps obtained a commitment from every local candidate that they would prioritise what is very much seen as a community facility, before an election in which expensive policies on health, homelessness and climate change were bandied about, collecting on such promises may still prove difficult.

A recent refusal of funding is currently being reviewed within the Department of Sport, he suggests, but this particular saga has actually been ongoing almost back to the time of Rooney’s €30 million claim.

The €200 million figure is based on an assessment that the league effectively needs 10 new stadiums, quite a bit of work to the rest in order to bring them up to genuinely modern standards plus, of course, the training facilities/academies.

The €30 million plus price tag on the new Dalymount Park gives a sense of just how costs can mount up and the glacial pace at which that project is progressing provides a pretty good sense of where these things sit in the political priority list. Still, it is hard to argue with McLoone when he claims that the need now would not be nearly so great if even half-decent support had been provided on an annual basis.

Most clubs look on rather enviously at the support Shamrock Rovers has received from South Dublin County Council, something that has allowed it to prioritise its academy. Others have made significant progress on one front or another but most, like Sligo Rovers, have taken an awful long time to turn plans into reality.

Drogheda United’s thwarted ambitions have been well documented and their latest application for funding has also recently been turned down but current chairman, Conor Hoey, says that might prove to be “something of a blessing,” as the case for something more transformative gathers pace among the town’s politicians.

“Given all that has happened to highlight the situation in the town, I would expect there to be significant infrastructural investment in Drogheda in the aftermath of this election and one of the areas that money needs to be put into is sport and recreation facilities,” says Hoey.

He too makes a strong case for what he says has the potential to be a “mini Abbotstown”, a multi sports facility open to all of the community on the edge of the town. Again, the money involved is substantial and though United, he says, would bring around €2.5 million to the table through the sale of United Park, public funding would still be necessary.

That, by most measures, would appear to be justified but the potential for a backlash from sections of population who feel their needs are more pressing is very real if football’s case is not very well made.

Quinn and co have done well on that front to date but if the election has not already closed their window of opportunity, it may very well pass as larger scale commitments are made in the process of forging a new political agenda.

No underage or minor GAA to be allowed under Level 5 Covid-19 restrictions 08:28
Ole Gunnar Solskjaer hails players after win over PSG 07:57
Rashford gives Man United another win in Paris; Gordon D’Arcy on Finn Russell 07:34
Seán Moran: Let’s leave the confusion aside and enjoy this All-Ireland 06:30
Gordon D’Arcy: Ireland don’t need to do a Finn Russell on it 06:00

1 Golf in Level 5 Covid restrictions: Clubs still waiting to hear if they can remain open
2 Gordon D’Arcy: Ireland don’t need to do a Finn Russell on it
3 Hugo Keenan could start in changed Ireland team against Italy
4 Ole Gunnar Solskjaer hails players after win over PSG
5 Aki, Ringrose and Henshaw: Brian O’Driscoll has his say on Ireland’s midfield riddle
Real news has value SUBSCRIBE