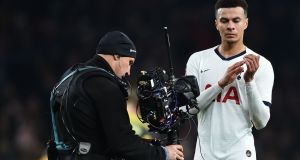 Dele Alli has apologised for a Snapchat video in which he appears to mock the coronavirus. Photograph: Glyn Kirk/Getty/AFP

The English Football Association has written to Tottenham midfielder Dele Alli to seek his observations about a social media post in which he appeared to joke about the coronavirus.

The England player, 23, has been contacted concerning a Snapchat video he posted on Saturday.

Alli, who has been on holiday while Spurs are on their winter break, posted the video of him wearing a face mask in an airport lounge with the message, “Corona whattt, please listen with volume.”

He then zooms the camera towards a man of Asian appearance before panning to a bottle of antiseptic hand wash with the video caption reading: “This virus gunna have to be quicker than that to catch me.”

The coronavirus has so far claimed the lives of over 900 people in mainland China, according to official figures, with more than 40,000 infected.

Alli apologised for the Snapchat post in a video on the Chinese social media platform Weibo on Sunday.

“Hi guys, it’s Dele; I just wanted to apologise on my behalf for the video I posted on Snapchat yesterday,” he said.

“It wasn’t funny and I realised that immediately and took it down. I let myself down and the club.

“I don’t want you to have that impression of me because it wasn’t funny and I realised that straight away and took it down.

“It isn’t something that should be joked about. I’m sending all my love and all my thoughts and prayers to everyone in China.”

The FA’s guidelines around media comments and social media posts remind participants that it will consider charges under Rule E3 if it is felt that someone has acted in an improper manner or brings the game into disrepute.

It would be considered an aggravated breach if a comment or social media post, whether explicitly or implicitly, makes reference to ethnic origin, colour, race, nationality, religion or belief, gender, gender reassignment, sexual orientation or disability.