Five soccer books to get your teeth into this month

For the legion of Leeds fans, David Pearce’s take on Clough’s short reign remains a must-read 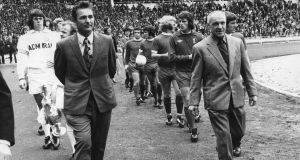 Brian Clough and Bill Shankly lead out their teams at Wembley Stadium for the Charity Shield match between champions Leeds United and FA Cup winners Liverpool in 1974. Photograph: by Evening Standard/Getty Images)

A Life Too Short: The Tragedy of Robert Enke

Originally planned as an autobiography, with Enke – who was expected to be Germany’s goalkeeper at the 2010 World Cup Finals – the author was required to take a quite different approach following the footballer’s suicide.

Enke kept notes (“So I don’t forget anything”) for a number of years intending to collaborate with Reng on the book, intending only to reveal his battle with depression when his playing days were over.

Enke had his first bout with depression in 2003 following an unhappy spell at Barcelona. In the book, Reng recounts one incident when Frank de Boer screamed at Enke from the centre circle after the ’keeper’s error contributed to a shock defeat at the hands of Novelda (a third division team) in the Spanish Cup.

Reng relates the story of how Enke – who also played with Benfica – overcame that depression to become Germany’s expected netminder for the World Cup only for what is termed as the “black dog” returned.

“Perhaps this book will do something to help depressives find more sympathy and understanding,” wrote Reng.

As we know, Michael Walker is a fine writer. This book manages to pack a lot of his style into a story of two football associations on the island of Ireland. This is a historical book which is never dated, with stories and anecdotes and a number of compelling interviews that are interwoven to provide a story of soccer in Ireland that is full of twists and turns and insights.

George Best. Liam Brady. World Cups. Euros. This is an examination of the game on this island (and past evidence of bureaucratic failings . . .ring a bell?) which is shows how one association became two, probes and enlightens, and retains the reader’s interest from start to finish.

For the legion of Leeds United fans (who are starting to reappear again), this book of Brian Clough’s management reign in 1974 which came to the grand total of 44 days is a must read.

Clough took on the role at Elland Road in succeeding Don Revie and Peace’s work – fiction (based on fact) if you will – manages to provide a riveting insight unlike any other into the mind and thoughts of the manager. After all, this was a man who hated Leeds (“hateful” and “spiteful place” he called it) and had a similar feeling for Revie, the legendary figure who proceeded him and who had moved on to take the England manager’s job.

One of Clough’s first actions on assuming control was to take an axe to Revie’s work desk and make a bonfire in the club car park. The 44 chapters, one for each day of Clough’s short-lived reign, is a tale worth reading.

By Richie Sadlier (with Dion Fanning)

A footballer’s tale than extends far beyond the dressing room and the pitch, Richie Sadlier’s memoir has a depth that separates it from the crowd.

The bones of it is that his playing career ended at 24 – having played for Ireland and on the verge of breaking into the big-time in the Premier League – but the meat of it is a story of how he confronted his demons and rebuilt his life to become a successful pundit and psychotherapist.

There are parts that are not easy reading but worth the read and the rawness (at times) of the Dubliner’s story is one that ultimately provides inspiration . . . . and respect!

Fear and Loathing in La Liga

Perhaps the greatest club rivalry in the sport, Lowe’s history of Barcelona versus Real Madrid comes at you from many different directions. El Clasico is more than a game, it is history.

And Lowe – an expert on the Spanish game – weaves together the story of the two teams, their cultural differences and how their rivalry developed and if anything has grown even greater.

From Di Stefano to Cruyff, Beckham to Zidane, Lowe’s interviews and anecdotes and encyclopedic knowledge is beyond doubt in managing to take us through to the Messi- Ronaldo rivalry that brought a modern twist to the old story.

1 Gerry Thornley: Wild reactions to this Ireland team as fickle as the wind
2 Cian Healy out of remainder of Six Nations
3 Man United’s net debt rises by €85.7m to €455.5m in three months
4 Dan Tuohy explains ‘rotten to the core’ comments
5 Doris and Kelleher make strong case to start against Italy
Real news has value SUBSCRIBE
Crossword Get access to over 6,000 interactive crosswords