Keith Long: Bohs won’t moan if Rovers get their revenge

Hosts hit by under-21s schedule, giving Stephen Bradley’s side a chance to close the gap 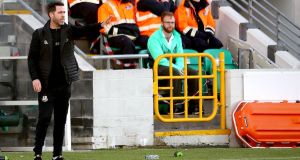 With the benefit of hindsight, the timing of the mid-season break might seem just a little off, but another round of hostilities in the rivalry between Bohemians and Shamrock Rovers still seems as good a way as any to send folks off on their holidays.

The televised game, at Dalymount, is the highlight of a Premier Division programme shortened by postponements due to players being away at the Toulon tournament, and offers Stephen Bradley’s side a chance to close the gap at the top of the table to just two points.

There will, says Bohemians boss Keith Long, be no whingeing if Rovers manage it, but the hosts would be bound to feel slightly aggrieved given the way they have been hit by the Under-21s schedule. Darragh Leahy is still away with the team, but Derek Pender and James Finnerty miss out due to suspensions that would have been served last week but for the fact that UCD had the game called off because they were missing a couple of players.

Long will be missing a couple of other regulars, with Rob Cornwall and Dinny Corcoran injured, and, while Keith Buckley and Robbie McCourt are available again, he is basically looking for a big performance from a stand-in back four if his side is to extend its remarkable run of results in games against Rovers – five wins and a draw in their last six encounters.

Stephen Bradley’s players might be forgiven for seeing this as an opportunity to exact some revenge, although Long is unsure that the visitors’ latest signings will be all that hung up on the historical record.

“I don’t think previous results and previous seasons really come into players’ thinking,” he said at the announcement on Thursday of the club’s new sponsorship by the Community Credit Union. The manager had just arrived from a photo-shoot at their Cabra West branch.

“Not everybody in Rovers’ squad has been there over the last two or three years; Jack Byrne for example, Aaron McEneff, players like that, they’re new signings, new to Rovers this year. So I don’t think it has too much of an effect on players. They have to deal with it and, while it hurts at the time, they process it, deal with it and move on to the next game – and tomorrow night is the next game.

Rovers, as it happens, are without McEneff and Sam Bone, but Seán Kavanagh is fit to start again after having come on at half-time in the draw with Derry.

Liam Buckley will be without Kyle Callan-McFadden, Regan Donelon, Johnny Dunleavy and Dante Leverock for the visit of Cork City to the Showgrounds, but John Mahon returns. City travel without Seán McLoughlin or Conor McCormack, both of whom are suspended, while Shane Griffin is amongst those absent through injury.

St Patrick’s Athletic will be looking for what would be a first win in four against a Finn Harps side that has Mark Coyle suspended and injuries to the likes of John Kavanagh, Michael Gallagher and Harry Ascroft.