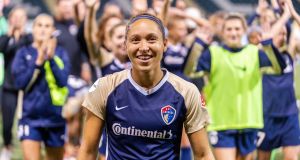 Jaelene Hinkle: “If I never get another national team call-up again then that’s just a part of His plan, and that’s okay.” Photograph: Diego Diaz//Icon Sportswire via Getty Images

The curious case of Jaelene Hinkle.

In June, 2017, she was called into the USA women’s squad ahead of a two-match tour of Scandinavia. With eight full caps already and the World Cup two years away, it looked the perfect opportunity for the then 24-year-old to confirm the growing consensus that she was the country’s best left-back.

Shortly after US Soccer announced the team would wear special jerseys in Europe, emblazoned with rainbow numbers in support of LGBTQ Pride month, Hinkle pulled out of the squad, initially citing “personal reasons” before later going into more detail.

“I just felt so convicted in my spirit that it wasn’t my job to wear this jersey,” she said.

“I gave myself three days to just seek and pray and determine what He was asking me to do in this situation . . . I knew in my spirit I was doing the right thing. I knew I was being obedient. If I never get another national team call-up again then that’s just a part of His plan, and that’s okay. Maybe this is why I was meant to play soccer, to show other believers to be obedient.”

The religious justification for her withdrawal came during an interview for The 700 Club, the most popular and incendiary show on the Christian Broadcasting Network, the go-to channel for fundamentalists across America, an outfit that regularly denounces the gay lifestyle.

When Hinkle’s North Carolina Courage visited the Portland Thorns in the National Women’s Soccer League (NWSL) shortly after the broadcast, opposing fans waved Pride flags and booed her every touch, something supporters of other teams soon began to copy.

Yet, through it all, Hinkle’s form remained unaffected by the jeering and, one year ago, she was recalled to the international set-up ahead of the Tournament of Nations, another World Cup warm-up event.

Bringing in the finest left-back in the NWSL seemed an obvious move although many were concerned about the potentially disruptive presence of a person with such fundamentalist views in a squad where some of the most prominent players and head coach Jill Ellis are gay and gay icons.

There was no need to worry about assimilating. Three days into training camp, Hinkle was cut for “footballing reasons”. Some suspect the shock recall and subsequent swift removal was a legal ploy, designed to provide the United States Soccer Federation with cover against any future discrimination lawsuit, especially since Hinkle’s stance has made her a cult figure among the religious right.

Twelve months later, Ellis has brought her team to France with a decent chance of retaining the World Cup, albeit without an orthodox left-back, at least one with comparable gifts to Hinkle.

She may not quite be of the calibre of Norway’s absentee Ada Hegerberg (who has become a cause celebre in the international media) but that the US usually starts Crystal Dunn in the position says a lot. Versatile and more talented she may be but Dunn normally plays striker for the North Carolina Courage team where Hinkle charges up and down the left wing.

There has been very little media coverage of the Hinkle situation. This may be due to the fact she was never an established first choice with her country so her absence is not pronounced, certainly not like Hegerberg’s.

The lack of interest might also be down to the fact most people acknowledge it would require an extraordinary feat of personnel management to be able to foster camaraderie at a tournament if one of the players fervently believes so many of her colleagues and the coach are doomed to burn in hell.

“My heart is that as Christians we don’t begin to throw a tantrum over what was made into law today but that we become much more loving,” she wrote on Instagram the day the US Supreme Court legalised gay marriage in 2015.

“That through our love the lost, rejected and abandoned find Christ. The rainbow was a covenant made between God and all his creation that never again would the world be flooded as it was when He destroyed the world during Noah’s time. It’s a constant reminder that no matter how corrupt the world becomes He will never leave or forsake us. Thank you Lord for your amazing grace, even during times of trial and confusion.”

It’s not difficult to see how somebody that devout might struggle to fit in on a team that has embraced so many progressive causes and fought its own federation for equal pay and proper treatment.

Megan Rapinoe, arguably the heart and soul of the squad, knelt for the national anthem in support of Colin Kaepernick, works with a charity battling homophobia, and, breaking new ground, once posed nude with her girlfriend, WNBA star Sue Bird, for the cover of ESPN magazine.

In contrast, Hinkle’s stance about the rainbow numbers was partly based on her belief God saved her career when he intervened to assist doctors who performed two surgeries on a blood clot in her leg.

The night before the second operation, she and her mother prayed for hours and the medical staff described the success of the procedure as a miracle. The type of faith that informs a Twitter profile describing her as Daughter of Christ first, pro soccer player second, and which explains why nobody seems to care less about missing out on the World Cup than Hinkle herself.

1 Keith Duggan: Through the glories and the disgraces, we were all Maradona addicts
2 Diego Maradona dies of heart attack, aged 60
3 Rugby Stats: Blame game at lineout time is on the whole team
4 All bets are on as America opens the gambling sluice gates and the dollars flow
5 Andy Farrell to delve deeper into Irish squad for team to play Georgia
Real news has value SUBSCRIBE
Crossword Get access to over 6,000 interactive crosswords