Own goal from Monica completes comeback for the Matildas in Montpellier 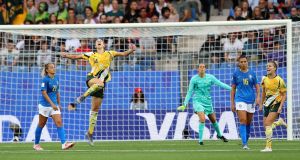 Australia came from two goals down to beat Brazil 3-2 in the women’s World Cup in Montpellier on Thursday, as an own goal from Monica capped a superb fightback and overshadowed a milestone goal for Marta.

Marta, 33, became the first player to score at five different World Cups as she put Brazil ahead from the penalty spot with a record-extending 16th World Cup goal before Cristiane doubled the lead.

Caitlin Foord reduced the arrears on the stroke of half-time before Chloe Logarzo equalised and Monica beat her own goalkeeper to hand Australia all three points.

Brazil and Australia both have three points in Group C as do Italy, who take on Jamaica on Friday after beating the Matildas in their opening match.

Marta opened the scoring after 27 minutes, converting from the spot after Leticia Santos was fouled in the area by Elise Kellond-Knight.

Cristiane netted her fourth goal of the tournament with a 38th-minute header to double the tally but Foord gave Australia hope with a close-range finish.

Marta, who missed the opening game against Jamaica through injury, was replaced for the second half as coach Vadao looked to rest her, but the decision backfired as Brazil lost control.

Logarzo equalised with a long shot in the 58th minute, eight minutes before Monica’s headed own goal was confirmed after a VAR review.

1 Paul Stirling’s heart over head decision to play on for Ireland bears fruit
2 Leo Cullen says rotation will be key as Leinster look to keep on winning
3 Owens’s comments increase tensions ahead of FAI senior council meeting
4 Sporting Cathedrals: Le Stadium - European fortress of the mighty Toulouse
5 Harding Park, named after a lousy US president who never stepped foot on it
Real news has value SUBSCRIBE
Crossword Get access to over 6,000 interactive crosswords