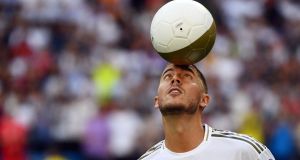 Eden Hazard believes he has the platform to try and become “the best player in the world” after signing a five-year deal with Real Madrid.

The 28-year-old Belgium forward has completed his €150 million move to the Spanish giants from Chelsea after passing a medical in Madrid on Thursday.

Hazard last week revealed joining Real had been a dream of his since childhood and reiterated his desire to win many trophies with the underperforming Blancos, who finished third in LaLiga last season and made an early exit from the Champions League, before turning his focus to personal ambitions.

Following a presentation ceremony and a ball-juggling show on the Bernabeu pitch in front of a rapturous 50,000-strong crowd of Real fans, he undertook his first official press conference.

“I’m going to try to become the best player in the world, but first I wanted to be in the best team in the world,” Hazard told reporters. “I’m not a ‘Galactico’ – I hope to be one day – I am Eden Hazard.

“At Real Madrid you have to win as much as possible and hopefully I can write another page in the history of the club.”

Hazard maintained ever since his record-breaking transfer from Chelsea was announced that he was motivated to join Real by a dream shared with his brothers Thorgan and Kylian – now both professional footballers – since their days kicking a ball about in the family garden back in Braine-le-Comte.

But a key secondary motivation was the presence of former France playmaker Zinedine Zidane as head coach at the Bernabeu. The three-time Champions League-winning manager stepped down in May 2018 but returned this March following the miserable tenures of Julen Lopetegui and Santiago Solari.

Hazard said: “Everyone knows Zidane has been my idol since I was a child, and him being the Madrid boss was an important factor for me coming here.”

He has designs on the 10 shirt – the replica handed to him for official photographs bore a name but no number on Thursday – but joked that current incumbent Luka Modric is not willing to give it up.

“I’ve been lucky enough to talk to Modric through [Chelsea loanee Mateo] Kovacic and asked him to give me number 10 but he said no,” said Hazard. “It’s not important to me, it’s just important to wear the shirt, with this badge on it.

Following recent setbacks Real appear to be embarking on a major spending spree this summer, adding Lyon left back Ferland Mendy, Eintracht Frankfurt striker Luka Jovic and Porto defender Eder Militao to their squad, as well as Hazard, now the most expensive ever purchase by the capital club.

The Belgian would not be drawn on rumours that Los Blancos will go back to the Premier League to make a bid for Manchester United’s Paul Pogba, or attempt a raid on Paris St Germain for Kylian Mbappe.

Hazard said: “Pogba and Mbappe are among the best players out there and I want to play with the best, but I’m not the one who decides – we’ll see what’s going to happen in the future.”

Real fans may get their first look at him in action for Real when Los Blancos meet Bayern Munich in an International Champions Cup friendly in Houston on July 21st. A game against Arsenal follows in Landover, Maryland three days later.

1 Owens’s comments increase tensions ahead of FAI senior council meeting
2 Leo Cullen says rotation will be key as Leinster look to keep on winning
3 Anthony Martial makes sure Lask don’t have the last laugh
4 Paul Stirling’s heart over head decision to play on for Ireland bears fruit
5 Harding Park, named after a lousy US president who never stepped foot on it
Real news has value SUBSCRIBE
Crossword Get access to over 6,000 interactive crosswords