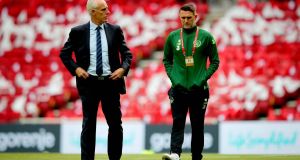 Middlesbrough have confirmed that Republic of Ireland assistant manager Robbie Keane has agreed to take on the same role at the Championship club.

Keane’s former Leeds United and Tottenham team mate, Jonathan Woodgate has been named as manager in succession to Tony Pulis who failed in his attempt to get the club promoted last season and Keane is one of three coaches coming into work with the 39-year-old.

“We want to get fans on the edge of their seat,” Woodgate said after news of his appointment on a three-year contract was confirmed. “We want as many fans back in the stadium as we can by playing attacking, exciting football with high pressure, pressing in different areas.

“We’ve got to have a philosophy at the club and I certainly believe in it. It’s what I’ve grown up believing in. I’ve had managers play the style of football I want to play and I’ve bought into it and my coaching staff have done exactly the same.”

Keane had said on Wednesday that he was considering the offer and sounded at that stage very much as though he was inclined to accept. His place in Mick McCarthy’s management set up with the Republic of Ireland team will not be affected, something he said had been his number one priority in weighing up whether to take on the role or not.

“I wouldn’t have done it if the FAI or Mick had a problem with it,” he said, “it would have been ‘no’ straight away. I’m enjoying doing this Ireland gig so I would have said no. The fact is that they have said ‘absolutely, no problem, go ahead’.

The former striker said that he intends to end up managing at a high level himself and is confident it will happen but is happy to take his time and learn his new trade over time rather than rush into something only to get knocked back due to inexperience.

“I’m not desperate for a job,” he said, “I don’t need a job and I’m enjoying what I am doing now. I want to learn as much as I can. And I will know when the right time is for me to move on and to be the head coach or the manager.

“So at this moment in time, learning from Mick, learning from (Mauricio) Pochettino and going to the Spurs’ training ground any time that I want to go. I am doing a lot of observing and I hope that it will stand me in good stead when I go forward.”

“I am thrilled for Robbie as he takes the next step in his path to becoming a top manager,” said McCarthy. “He told me about it the minute he was offered the job and I told him that it was only a runner if he continued with Ireland.

“We are building for the future with this Ireland team and Robbie is a key part of that. He has made a big impression on the players and the staff already as my assistant coach and this new role will only improve him which works for Middlesbrough and, most importantly, for Ireland.”

Conway offered the former Ireland captain the best wishes of everyone at the Association in his new role as number two to Jonathan Woodgate at Middlesbrough.

“Robbie is an Irish football legend and we wish him well with this new appointment,” said Conway. “He has served Ireland magnificently as a player, as a captain and now as a coach. The experience he gains at Middlesbrough can only improve Robbie as a coach with Ireland and we look forward to seeing the effect that brings to our national team and our Euro 2020 qualifying campaign.”

Keane has reiterated his commitment to his Ireland role under McCarthy. He said: “This is a great opportunity for me on my pathway to a manager’s job in the future and I am very excited about it.

“I am also grateful to the FAI and to Mick McCarthy for allowing me to take this role and to continue with Ireland. I made it very clear to everyone at Middlesbrough that I would not be coming here if I had to give up my Ireland role and they are happy to agree. Ireland means everything to me as it always has done and I look forward now to helping the team in our bid to make the Euro finals and those games in Dublin.”

Meanwhile, despite their draw in Denmark and defeat of Gibraltar at home, the Irish team have dropped three places in the Fifa world rankings to 32 with Michael O’Neill’s Northern Ireland leapfrogging as they rise five places to 28.

There is no movement at the very top with Belgium, France, Brazil and England still occupying first four spots in that order while Portugal are two to five after their Nations League success.

Denmark remain in 10th position while Ireland’s other big qualification rivals, Switzerland, are down one to nine.