Juventus and Chelsea reach agreement in principle over Maurizio Sarri 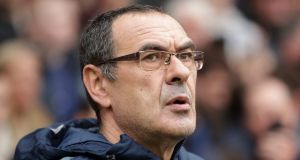 Maurizio Sarri looks set to return to Italy to take over as manager of Juventus. Photograph: Adam Davy/PA Wire

Juventus and Chelsea have reached an agreement in principle to allow Maurizio Sarri to return to Italy, although negotiations over a compensation fee for the manager’s departure could reach up to £5 million.

Sarri, who led Chelsea to third place in the Premier League and the Europa League title, is set to sign a three-year contract to succeed Massimiliano Allegri at Juventus after the Italian champions held talks with Chelsea this week.

It is understood that the terms of the deal will see Juve pay around £2.5 million to secure the 60-year-old’s services for the new season, with the remainder due in bonuses should he lead them to a ninth successive Scudetto or the Champions League.

Meanwhile, Didier Drogba has endorsed Frank Lampard’s credentials to become Chelsea’s manager once Sarri joins Juventus, with the former striker insisting his old team-mate would be “a very good option for the club”.

Although the Derby manager is understood to be one of several names on the shortlist together with candidates such as Massimiliano Allegri and Watford’s Javi Gracia, Drogba believes Lampard would be the right choice.

“I think it is a very good option for the club,” he said. “He has done well with Derby, taking the team to the playoff final.”

Asked whether he felt Lampard was ready for the post after one season as a manager, Drogba responded: “So he is never going to be ready, then? Does he have to wait until he is 50 to be ready? I think it depends on your experience and depends on your desire to succeed and do it. If he feels ready I don’t think it is too early.”

Drogba, who made more than 250 appearances and scored more than 100 goals for Chelsea, played with Lampard for almost a decade and was part of the side that won the Champions League in 2012. He will link with Michael Essien – another former Chelsea team-mate – at Stamford Bridge on Sunday for the Soccer Aid charity match against an England side featuring John Terry.

Essien admits he did not necessarily see Lampard as management material when they were playing together. “Frank was a real surprise for me but he has done really well at Derby,” he said. “When we were playing he was always quiet and very reserved but he has made a great start.”

Asked whether Lampard could take over at Chelsea, Essien said: “Why not? Anything can happen – football is full of surprises. If he comes then it’s brilliant because he knows the club and everyone around it so he would do a good job.” – Guardian