Cork City and Dundalk also advance along with Bohemians 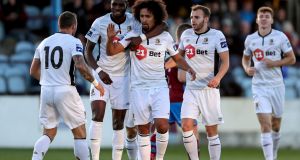 Waterford have advanced to the quarter-finals of the FAI Cup after they defeated Drogheda United 1-0 at United Park.

Bastien Héry’s early strike was the difference between the two sides in a fiercely fought Cup tie. The visitors took the lead after just four minutes as Héry’s powerful drive from all of 30 yards found the far corner with Paul Skinner beaten in goal.

It was nearly 2-0 seconds later as indecision in the Drogheda defence saw Ismahil Akinade nip in but the forward lifted the ball over the bar before colliding with Skinner.

Drogheda gradually grew into the tie but their first real chance came via Chris Lyons who headed tamely into the hands of Niall Corbett.

A quickly taken free-kick on 25 minutes was then only partially cleared to the edge of the box with Lyons firing narrowly over under pressure.

Waterford looked the more composed side on the ball but it was Drogheda who were showing greater intent as Corbett showed good hands to deny Sean Brennan’s powerful strike.

Former Ireland international Noel Hunt missed a glorious chance to double Waterford’s lead as he somehow missed the target with a near post header from Paul Keegan’s corner.

The Premier Division side were nearly made to pay for that miss as Lyons drove at the heart of their defence before slipping Doyle through on goal but he failed to strike the ball cleanly as it rolled harmlessly wide.

Drogheda continued to pile players forward and they were nearly caught when a defence splitting pass from Hunt played his strike partner beyond the Drogheda backline but his low strike deflected off the legs of Skinner and behind for a corner kick.

Despite late Drogheda pressure, Waterford held on to reach the final eight of the competition.

Holders Cork City had a comfortable win at Turner’s Cross despite a slow start.

Aaron Barry’s header just before the half-hour had John Caulfield’s side in front and only good saves from David Sterio prevented the lead from being extended before half-time.

Kieran Sadlier had the second goal soon after the restart and, after Peter Cherrie saved from Darragh Reynor, Josh O’Hanlon made it 3-0 from a penalty on 67 minutes.

Ronan Coughlan completed the scoring for the Rebel Army.

Eoghan Stokes fired the clincher for Bohs as they easily worked their way past Galway United to reach the third round in Eamonn Deacy Park.

Perhaps still bruised from last week’s humbling 4-1 home defeat to Longford Town, United lined up with five at the back and straight from kick-off they sunk deep into their own half.

But even with their reserved start the home side were caught out on six minutes. Twice their defence failed to fully clear their lines, but Darragh Leahy was fortunate to see his cross from the left find the top corner of Tadhg Ryan’s net.

A change in formation saw Robbie Williams step into midfield for United but a minute from the interval Keith Ward came very close to a second and his free-kick from the edge of the box just cleared Ryan’s crossbar. Despite all their domination Bohs had to be satisfied with a 1-0 half-time lead.

United were fortune not to concede a second in the 50th minute, but following a Williams jersey pull, JJ Lunney’s penalty was saved well by Ryan.

Eoin McCormack missed a great chance to level for United, while Ryan was called into action again with a stunning fingertip stop to deny Keith Buckley, but he couldn’t stop Stokes late on.

Dundalk remain on course for a fourth successive FAI Cup final appearance after seeing off Division One side Finn Harps at Oriel Park.

Both sides had early chances with Ciaran Coll curling a free-kick just wide before John Mountney saw a thundering drive come back off the underside of the bar.

Dundalk made the breakthrough in the 24th minute when Ronan Murray drilled home a penalty after Dane Massey was upended by Jacob Borg.

Murray turned provider for the second in the 52nd minute, crossing for Georgie Kelly to head home his first goal for the Lilywhites.

Harps boss Ollie Horgan was sent to the stands shortly afterwards by referee Paul McLaughlin and Dundalk should have added more goals in the latter stages through Dylan Connolly.