Pat Devlin: ‘we are a development team and club and we have to accept that’ 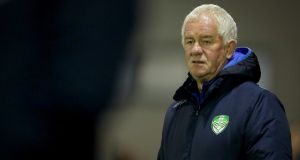 Cabinteely manager Pat Devlin insists Cabinteely are in good shape for the new season but acknowledges that the club talked with rivals at the end of last season as they weighed up whether to continue in the League of Ireland.

“There was a lot of talk about us being in a bit of bother,” said the longtime Bray Wanderers boss at an event to announce his current club’s new sponsorship deal with sports e-learning and online training company Edufit.

“I think every club was in a bit of bother, though. And with partners like Edufit, we are in a better place now.”

Devlin says that clubs generally were encouraged to speak with each other about how they might work more closely together and, he says, “I would totally agree with that, I thought it was the right thing to do so to be quite honest, and we decided to look into that.

“We talked to a number of clubs about partnership, about sharing things but it got out there that we were in talks with this club and that club and so on and really what we were trying to do was to look at our pathway and see what was most suitable for us.

“In the end, we concluded what what was most suitable for us is to keep going the way we are going but to try to improve it and that’s exactly what we are doing.”

The club made the promotion play-offs last season and, despite the loss of some his team’s better players in the off-season, he is hopeful that they will challenge to go up again.

“But we’ve got some great kids coming through so from a football point of view it’s not a problem at all, it never is.”