All in the Game: Ighalo worrying fans with No. 25 rationale 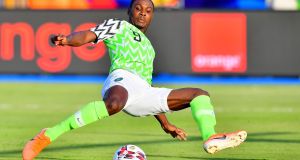 “One game we have players A, B and C out and the next we are without D, E and F. It’s like when you pull a blanket up and your feet are left out and then you cover your feet but half of your body is out. That’s us.” Need it be said, it’s mainly Harry Kane’s absence that is chilling Jose Mourinho’s toes.

1,500,000: That’s how many million quid David de Gea earns a month, according to L’Equipe’s figures last week, making him the highest paid player in the Premier League, just ahead of Mesut Ozil and Kevin de Bruyne, both on £1.4m. Cripes.

The Greta Thunberg of German football

When Bayern Munich old boy Mehmet Scholl described the club’s current international Joshua Kimmich as “the Greta Thunberg of German football” last week most weren’t sure initially whether this was meant as a compliment or an insult. It turned out to be the latter, Scholl complaining that Kimmich talks too much, that he should shut up and focus on his football.

A quick trip to - where else? - Wikipedia would have made it rather clear that Scholl has never been overly keen on climate change activists. “As a young player, he was quoted with the words “hang the Greens while there still are trees”, seemingly expressing his dislike for the German Green Party.” (Seemingly?)

(He was also asked in that interview “one thing you’d never do?” “I’d never put a blind man at an advertising pillar and tell him that this is the wall he needs to walk down to get home.” We’re lost here).

Any way, according to the Wikipedia author, Scholl was “sued by a Green politician for instigation to murder and eventually he donated 15,000 DM to charity. Afterwards, Scholl was asked by a journalist which party he would vote for. He answered: “Green naturally - I cannot leave them hanging”. Gulp.

“No 19 was available. When I was at Watford, I put on 24 - 24 is not available. In Shanghai, No 9, it’s not available, so I said 24 + 1 is 25, so I said ‘okay, let me go for 25 instead of 19’. Twenty-five is a perfect number. One above what I wore before I was in the Premier League.” As one Manchester United fan put it about Odion Ighalo’s shirt-number-selecting process, “I hope he doesn’t make scoring goals as complicated”.

“Many feel the league in France is weaker than others, but look at other leagues - look at England! Liverpool are streets ahead! But when we build up a similar lead it’s because the league isn’t as good?!” Paris Saint-Germain’s Angel Di Maria has a point, you know.

“I had to manage this chess game without pieces. No bishops, no kings, no queens. Very, very hard with so many injuries and problems... I cannot speak about the progress I want to make because I don’t have the players I want.” Jose Mourinho after an under-strength Spurs, eh, check-mated Southampton in the FA Cup.

Dizziest manager of the season: We’ll go with Eugenio Corini who was appointed by Brescia back in September 2018, sacked last November and then reappointed a month later. But the team has been struggling and after a defeat by Bologna a week ago there was speculation that he might be sacked all over again.

The club, though, gave him one of those votes of confidence: “It is important to reiterate the full confidence of the owner in the work of the coach and his staff and we intend to continue with this group, with even greater commitment and a little more positivity,” read their statement.

Four days later? “Brescia announce they have relieved Eugenio Corini of his role as coach. The club thanks Mr Corini and for his professionalism, dedication and effort.” He must be exhausted from clearing out his desk.

Jonathan Barnett has a full-time job commenting on the nigh on endless speculation about Gareth Bale leaving Real Madrid, the agent usually insisting that his client has no desire to depart the club. Last week, though, he admitted that Bale had been tempted by a mega bucks offer from China in the summer, the talk being that Jiangsu Suning were willing to pay him a million quid a week.

So he was only interested in the move for altruistic reasons? “The money was special too - it would have made him the highest paid player on Earth!” Eh, no.

Sky’s Jeff Stelling brought us some happy news on Saturday. “Congratulations to Jordan Henderson and his wife Rebecca who have given birth to a baby boy today. The birth comes nine months and one day after Liverpool beat Barcelona by four goals to nil at Anfield. Mo Salah’s wife Maggie has given birth to a baby today as well …. nine months and one day later. You couldn’t make it up.”

Recalling who got the winner that night after some speedy thinking from Trent Alexander-Arnold, James Milner took to Twitter to give credit where he reckoned it was due on the baby front: “Origi assist #cornertakenquickly.” Hopefully both babies will be named Divock.