Mick McCarthy: everyone was relieved but that’s premature

Originally drawn in Group C alongside the Netherlands and Germany, Mick McCarthy’s side were moved to Group D as no more than two host nations can play in the same group. Video: Euro 2020 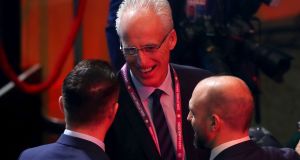 Mick McCarthy says he is content with the task that his Ireland side has been handed at Sunday’s draw for the qualifying stages of the European Championships at the Conventions centre in Dublin. He and his players must manage a top two finish in a five nation group that also includes Switzerland, Denmark, Georgia and Gibraltar.

Most of those are very familiar to the Irish players and supporters already while McCarthy made it clear that he remembers the Swiss well from his final match in charge last time around, his only competitive defeat at home. It is clearly not an easy group and yet it looked pretty welcoming in real time as Ireland were actually drawn into one that included both the Dutch and the Germans before being bumped along one due to a rule that only two nations hosting games in the finals could come up against each other at this stage of the competition. The Republic of Ireland’s narrow escape had consequences for Northern Ireland who were drawn next and so took the place left vacant by the procedural move.

“All of us who hadn’t been drawn in Pot C with Holland and Germany breathed a sigh of relief,” said McCarthy a little while afterwards. “Not me. I laughed; I thought it was a certainty.

“Whichever group we ended up in, we had to take it, everyone was slightly relieved but that’s premature, when you have Switzerland, who I think are one of the best teams in Europe at the minute, in the group and Denmark who have been our nemesis of late . . . knocked us out of the World Cup and then beat us in the Nations League.

“So, it’s not going to be easy. But when we qualified for the World Cup we had Portugal and Holland, everyone wrote us off and we didn’t lose a game against any of them and we ended up qualifying.”

Asked about Georgia, he admitted to not being up to speed on them just yet but suggested he knew enough to be wary. “We have played them recently, I was chatting to Kev Kilbane and he said they have a good side,” he said. “I think that was one of the toughest ones from Pot Four, but then we missed Azerbaijan and ended up with Gibraltar. It’s the group we have got and I am looking forward to it.

“At least now I know the teams and I can watch the players, watch past games and get down to planning. Georgia is a fair old trip and it’s a three-hour time difference; that makes it unusual. It’s not easy to travel long distances so the fact that we don’t have to travel to Azerbaijan, which is even further away, does help. I am sure Denmark and Switzerland feel the same way.

The fact that it is a five, rather than a six, team group means there will be a couple of friendlies to be played along the way and McCarthy was asked if this might help in terms of changing the way Ireland play. Speaking before the fixtures were announced, though, he suggested that the team is still likely to have to hit the ground running and so it is not his priority.

“When we are playing on a Saturday and I get them in on the Sunday and we play again when, Thursday? I’m hardly going to have a revolution in terms of style of play, am I,” he said. “Maybe if you had a season to turn it around but that’s not going to be the case so it’s going to be about being well drilled in four or five days, making sure that we are ready to go, we know what we are doing and we can be competitive.

“Five days training isn’t going to change the world believe me; it might change the result, though.”

Michael O’Neill, meanwhile, said that that his side would have to produce some of the best results in Northern Ireland’s history if they are to qualify out of a group that included both the Netherlands and Germany.

“I think we’ve proven that we can match the top teams in Belfast,” he said, “but it will take two more momentous performances to take points off Holland and Germany there. Looking at the opposition you would probably say that from four homes games we are probably going to have to take minimum nine, maybe even 10 points and then obviously you are going to have to try to take seven or eight on the road.

“Hopefully then you’ve got a chance of occupying a top two position. I think over the last four years we have proven ourselves to be able to play top tier, second tier European nations. Now we have to go in against two top tier ones to be honest and that’s the challenge but if you don’t believe you can do it then there’s no point really.”