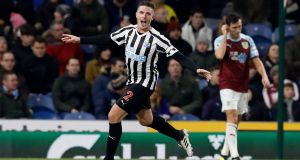 Newcastle put their alleged hoodoo behind them – in seven previous Monday night outings in the Premier League they had not even managed to score – though at the moment it does not take a great deal of luck or superstition to break down the Burnley defence.

Had Matt Ritchie not come up with a candidate for miss of the season in the second half the visitors’ win would have been even more emphatic. Newcastle have now taken nine points from their past three games to leave Burnley looking over their shoulder at signs of improvement in the sides below them.The Clarets need to stop leaking goals before they can form any mid-table designs of their own.

After a half-hour delay due to the referee’s assessor needing medical attention in the tunnel, Newcastle had the brightest of starts. Upfield for an early corner, Federico Fernández tried his luck with a shot when the chance came his way and Ben Mee’s attempt to get in the way only succeeded in sending the ball beyond Joe Hart’s reach. It was a debatable own goal because the initial attempt looked on target, but the goalkeeper probably had the shot covered before the Burnley captain’s intervention.

Chris Wood had the best couple of chances as Burnley attempted to get back level. He could not keep his shot down from the first one, failing to properly get hold of a raking ball from Matt Lowton that picked him out at the far post, though did much better from a lot further out with his next effort, producing a stinging 30-yard shot that almost caught Martin Dubravka by surprise in the Newcastle goal.

Just as Burnley were enjoying more of the game, however, Newcastle delighted their vociferous support by scoring again.

Goals have not been plentiful for them this season and even the most rabid Newcastle fans would have been expecting a Rafa Benítez side to sit on an early lead, at least until half-time, but midway through the first half the visitors again took advantage of hesitant defending at a corner. Matt Ritchie played a one-two with Ki Sung-yueng at the set piece, before sending over a cross from the right that Ciaran Clark reached ahead of Mee to glance a header into Hart’s bottom corner. Both captains were therefore on the scoresheet before the half-hour stage, unfortunately for Mee and Burnley both in the same net.

Defensive solidarity used to be a plank of Burnley’s survival platform, they would not allow opponents many scoring opportunities and worked on being well-drilled at dead ball situations. Not so this season. They have been conceding goals at a rate of slightly more than two per game, and without making Newcastle work particularly hard put themselves at the same disadvantage with barely a quarter of the match gone.

It says something for Burnley’s spirit that they did not give up trying at the other end. Mee made some amends for his earlier errors with the diagonal ball from halfway that allowed Sam Vokes to pull a goal back, though most of the credit should go to the striker for a masterful header from the edge of the area. It takes power and accuracy to score an aerial goal from that far out, but spotting that Dubravka was standing a few yards off his line Vokes directed his effort upwards and over him.

The keeper was in action again, beating away a fierce shot from Wood in the closing seconds of the half. Burnley had made a terrible start, though by half-time they were the side looking most likely to score next.

For all that, the home side were allowed a scarcely believable reprieve at the start of the second half, when Ritchie managed to miss an open goal from a distance measurable in inches. DeAndre Yedlin made such inroads into the Burnley area after catching Robbie Brady napping he almost scored himself, but Hart managed to get a boot in the way and the ball rolled across the face of goal. Arriving at speed from the left Ritchie seemed certain to score, yet although a tap-in was all that was required he shot into the side netting.

Newcastle spurned another opportunity to make the game safe 10 minutes from time, when Joselu ghosted behind the defence to reach Ayoze Pérez’s inspired pass, only to crash his shot against an upright.

Vokes and Wood went close for Burnley before the end, but with a little more composure in front of goal Newcastle could have been looking at a handsome Monday night victory.