Chelsea get back to winning ways against Fulham 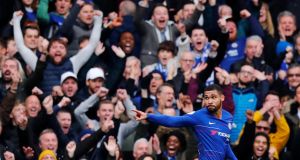 Chelsea will consider this normal service resumed after last weekend’s humbling across the capital at Tottenham Hotspur, though Maurizio Sarri never gave the impression he was a satisfied man as he prowled the edge of his technical area. This was a grind of a derby against Fulham, a team attempting to instigate some much needed defensive surety, which was only properly claimed late on when Ruben Loftus-Cheek’s cameo yielded a fine second goal.

There had been anxious moments to endure up to then, with Chelsea showing the strain as their local rivals threatened, albeit fitfully, to force parity. Claudio Ranieri, while clearly far from content with the first defeat of his stint in charge, might actually pluck more positives than his compatriot. At least Fulham have demonstrated a measure of resilience. Chelsea, their sights set higher, prevailed but their lack of fluency is a concern. Even in victory, the prolonged scowl worn by Álvaro Morata through a 20-minute substitute’s appearance rather summed up their current mood.

At least Sarri could not complain about a slack start. Fulham had been punctured within the first four minutes, the first time Chelsea had scored in the first 20 minutes of a Premier League match since mid-August. The lead owed much to the visitors’ generosity, Jean Michael Seri struggling to control an awkward pass from Cyrus Christie with N’Golo Kanté nipping in to claim possession. The Frenchman scuttled forward before liberating Pedro into the penalty area at his side, the Spaniard turning inside Alfie Mawson to finish with ease.

That was Kanté’s second assist in 14 league games this term, as many as he had contributed in his first two years at the club. A World Cup winner who has struggled at times to adapt to a tweaked role in this lineup, with Maurizio Sarri convinced he does not boast the technical ability to sit at the base of his first-choice midfield, seemed to have a point to prove. There were sprayed cross-field passes out to Eden Hazard on the wing, and all his customary busy energy as he drifted inside to disrupt the visitors’ approach, though freeing up this team’s forward thinkers was no easy task.

Fulham, that early bout of sloppiness aside, demonstrated defensive improvement so early in Ranieri’s tenure. They did not press Chelsea with the frenzy mustered by Tottenham Hotspur the previous weekend, allowing Jorginho far more time on the ball than he enjoyed at Wembley, but opted instead to clog up the hosts’ approach-play by flooding back in defence. As a result, Hazard and Pedro, the liveliest of the home side’s front-line, would collect, look up and blanch at the sight of massed ranks of white shirts through whom they would have to pick a route to goal.

Marcos Alonso’s delivery was erratic and Olivier Giroud, with four goals in his previous three club appearances, frustrated and isolated. The Frenchman’s only real glimpse of goal came after a marauding charge up-field by César Azpilicueta, who has agreed a new contract at the club which will be announced in the days ahead, but Sergio Rico reacted smartly to save. When Hazard spat away a low shot late on, with Rico pawing back into play, the recently introduced substitute Morata could only sky the rebound over an open goal, much to Sarri’s exasperation. His relief would only come eight minutes from time.

In truth, it was the other Spanish goalkeeper on show, Kepa Arrizabalaga, who had actually felt the busier, though he was perhaps grateful that Fulham’s best opportunities were forever falling to Calum Chambers. The defender turned central midfield shield is far from a natural finisher, but he forced Kepa to block a header, then push away a shot fizzed in first time from the edge of the penalty area.

How Ranieri needed one of those opportunities to be converted. His team became more frantic as time drifted away, allowing Chelsea’s substitutes the chance to make an impact. Loftus-Cheek, who might have been absent from the bench had Ross Barkley not suffered a knock in training, duly combined slickly with Hazard and Pedro just outside Fulham’s penalty area. The Belgian’s burst into the box attracted panicked defenders, his slipped pass to the right prodding Loftus-Cheek into space vacated by Maxime Le Marchand. The England midfielder’s finish was emphatic, a fifth goal in six club games plundered, and Chelsea’s victory was complete.