Van Dijk: Liverpool have not turned into a bad team in Europe 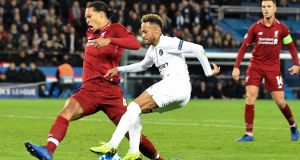 Virgil van Dijk has said Liverpool have not morphed from Champions League finalists to strugglers inside six months because of the quality of their play but the calibre of their Group C opponents.

Liverpool will be eliminated should they fail to beat Napoli 1-0 or by two clear goals at Anfield on December 11th, having lost all three away games in the Champions League group stage for the first time. Their latest defeat and poor away display came at Paris Saint-Germain on Wednesday, and Van Dijk, while admitting that Liverpool performed badly at Red Star Belgrade, insists the quality in Group C has been a major influence on the team’s failure to recreate last season’s form in Europe.

The Netherlands captain said: “We don’t need to forget that we played Napoli, one of the best teams in Europe; PSG, one of the favourites to win the Champions League; and obviously the game in Belgrade was not good enough. We don’t need to think we are a shit team, basically. It can happen.

“But the frustrating thing is how we conceded the goals and then it’s always difficult to come back. I don’t know if there’s any explanation for that right now because I can’t think of one – otherwise we should have used it already. But now we need to look forward, and the only option for us to qualify is to win against Napoli, no matter what.”

“Obviously they’re world-class players but I don’t think it’s needed in the game at times,” said the defender, who rounded on Neymar following a theatrical collapse in the penalty area. “Sometimes they get hit and they will go down and sometimes I think it’s too easy and I’m getting so frustrated.

“It’s important to keep your head cool but every time we made a foul they all came to the ref trying to get us a yellow card. We should do the same at times, and I think in the second half we did it better. It’s not the type of game that I like. We still respect them how they are as players, because they’re world-class, but it’s not really necessary at times. But other than that, they scored two goals, we lost and that’s it.” – Guardian