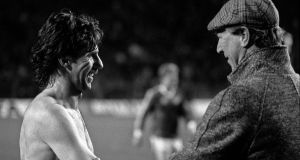 It was towards the end of my career, I was trying to come back from an injury. It had been a long haul. I was playing for Liverpool A, effectively their third team, on a Saturday morning. And who turns up only Jack. He’d driven all the way from Newcastle just to watch me and have a chat. He asked how I was doing. I said I felt I was getting there, but I wasn’t there yet. “As soon as you are,” he said, “you’ll be in the Irish team”. That’s all I needed to hear.

It’s funny, that was one of the first things that came to mind when I heard that Jack had died. More, even, than the great days he had playing for Leeds and England or those magical times managing Ireland.

It was days like that in Liverpool that people wouldn’t have seen. He knew I had been struggling, so he made that effort. He was great. He had a genuine warmth and a human touch. No bullshit, either. You just knew where you stood with him all the time.

I would have been around nine when I watched him win the World Cup, when I was living in the outskirts of Preston, me and my pal Steven Dewhurst from four doors down out on the road pretending we were playing extra time in the final. And fighting over who got to be England.

That World Cup winning team ended up having a big influence on my career - I played for Bobby Charlton at Preston, where Nobby Stiles was our reserve team coach, and, of course, for Jack with Ireland. Bobby so obviously didn’t want to be a manager, but with Jack it seemed to come easy. He was a natural.

Like most, I was amazed when he got the Irish job because I assumed it would be Bob Paisley – and I was thinking ‘I’m going to get 200 caps if it’s Bob’. But in the end they got the right man for the job, even if they got there in a roundabout kind of way.

I would have played against Middlesbrough and Sheffield Wednesday when he was their manager, so I knew what to expect of him. His teams were always very direct, a big centre forward and all that kind of thing.

We had some very good players when he came in, but we just needed harnessing, we were never as good a team as we should have been. From day one he defined a way of playing for us, he said there would be no plan B or C - and if you don’t want to play that way, tough.

I wouldn’t have been 100 per cent sure about his style, but soon enough the results starting coming. It worked. And with that came belief and a trust in him. He managed to convince some very talented players that this was the way Ireland were going to be successful. The only regret for me is that he didn’t get more out of Liam [Brady]. Liam was a great player and it’s just a pity we couldn’t fit him in to that system. But Liam didn’t like the way that we played, and Jack just felt he slowed the game down too much. So it was probably never going to work between them.

So, when we went out there, every one of us knew our job precisely. If you strayed from doing it, there’d be a glare from the sideline. You daren’t look. I remember him coming over to me after we’d beaten Scotland in Glasgow in 1987, when I got the only goal of the game. I thought, ‘what a nice bloke, he’s coming to tell me how well I’d done’. Instead it was “what the ‘effing hell were you thinking of?” I got a bollocking for breaking forward at the end to try and get a second.

Ahead of the game he had come up to me in training and told me I wouldn’t be playing in my usual position at centre back, I’d be in midfield. He wanted me up against Graeme Souness. I thought, ‘oh great, thanks for that’. As it worked out, Graeme didn’t play, he was injured. When Jack named the team Ronnie [Whelan] looked at me and said, “am I playing left-back?!” Paul [McGrath] was like, “I’m right back?!” We were all “o.......kay”.

But we won. So we thought, right, he knows what he’s doing. He wasn’t a master tactician or anything, but he had us playing in a way that was proving successful.

We had absolute respect for him. The players hung on his every word, they really did. Total respect. And in my time with him, which was all too short because I had to retire, I can never remember him losing the plot. He stayed calm, always in control, no matter the circumstances.

I think everyone who knew him really, really liked him – even players he would leave out of the team now and then – because he was honest with you. And without question, I would say that Jack was the most honest manager I ever played for. And I think the absence of bullshit was one of the reasons the Irish people grew to love him like they did. That and winning matches and qualifying for major tournaments, of course. He put us on the map in terms of international football.

He was extremely approachable and a genial man. I remember in the hotel in Orlando in ‘94 he let all the supporters in. He’d have 25,000 photos taken with them if he had to, no problem. That’s the way he was and it rubbed off on the players. He’d say “you’re playing for this lot, they’ve travelled thousands of miles, you need to repay them’.”

And that’s how he was, a decent down to earth man. He never, ever talked about winning the World Cup, there was none any of that - that was history. He was only interested in the here and now. So he never rammed that down anybody’s throat. And he could have done.

On day one he said to us, “I’m just Jack, you don’t have to call me boss”. And that’s how all of Ireland came to know him too, just ‘Jack’. He put a smile on everybody’s face. Above all, he was a good man.