Jack Charlton’s tactics were divisive but he transformed Irish expectations

Emmet Malone: Manager never wavered in his convictions and stuck to his way 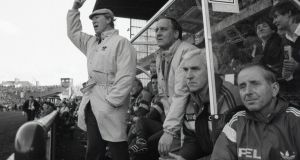 There will always be plenty to argue about with regard to Jack Charlton’s time in charge of the Republic of Ireland but it seems beyond dispute that he transformed the level of expectation around the Irish team.

Guiding Ireland to three major championships in his first four attempts seems an astonishing achievement even now. His critics may continue to contend that the players were there to do it all another way but few were all that fussy as Eoin Hand departed in the wake of a 4-1 defeat at home by Denmark that made it just one win in 11 for his side.

If football managers, like generals, need to be lucky then Hand might not have been the man for the job. He and the team caught some very bad breaks at key moments of his reign but there was a sense too towards the end that his increasingly weak position was made worse by the frustration some of his players felt at not being part of something better.

Early evidence that Charlton might enjoy the rub of the green was provided by the manner in which he came through an FAI selection process that had more than a touch of farce about it. That he was not a clear choice was no great surprise for his credentials at that point were less than compelling really.

A one-club man as a player, he had had a great career with Leeds United and England, enjoying memorable successes under Don Revie and Alf Ramsey, but after initially having done well in management himself with Middlesbrough, his achievements were decidedly modest and it was far from clear what opportunities might present themselves after he resigned the Newcastle job on the eve of the 1985/86 season.

His faith in himself and his game plan remained utterly undimmed, though. He arrived into the job with a very strong sense of how he was going to change things and what that would involve demanding from his players.

“He made it very clear that first time on the training ground,” then Shamrock Rovers midfielder Pat Byrne would later recall, “that ‘we are not going to have any nice stuff here.

There were, as has been widely suggested, elements of the pressing game much more recently favoured by some of football’s most progressive coaches but it was rather more basic in several respects. It was certainly not pretty but it could be exciting at times and on the better days it seemed to make an often underachieving Ireland side feel like some sort of strange irresistible force.

His opening game, a friendly against Wales at Lansdowne Road was lost, but it would be six and a half years - Spain in October 1993 - before his side was beaten there in a competitive match. In the intervening time, there had been 11 competitive wins and five draws. What was, by international standards a ramshackle ground intended first and foremost for rugby, took on that ‘fortress’ status that every team talks about achieving for their home but few do.

The team’s record there was to be the backbone of his success with Ireland. A string of lengthy unbeaten runs were constructed around their apparent invincibility on home turf; 12 games, then 17, then 11 and 11. Several only ended major championships where there was no shame whatsoever in that Ireland team being beaten by some very good opponents.

Though some certainly tried, especially later on when the initial shock of it had subsided, the success was tremendously hard to argue with. Sure, you could make the case that with the players Ireland had at that time, a good deal might have been achieved playing a more sophisticated brand of football but from Charlton’s side, reaching the quarter-finals of the World Cup in Italy was quite some comeback even if there was a great deal to criticise about the performances there.

And while the fundamentals of the football plan were certainly basic, they were well worked and did generally produce a few goals, at least in qualifying.

When it came to Euro ‘92, Ireland missed out on making it to the finals by just a point after a campaign in which the team had drawn all four of its games against its chief qualification rivals. Letting a 3-1 lead in Poland slip was the most obvious cause of the failure but even a 1-0 win in the home game would put them through with twice as many goals scored as an England side that included Gary Lineker. Two years later, they qualified for USA ‘94 behind Spain having scored four times more than third placed side Denmark.

There were frustrations along the way for sure but Charlton’s self-belief only increased and the players quickly began to buy into his vision of what Ireland could achieve if they pulled together.

The players, for the most part, laughed at his foibles but generally accepted they were collectively on to something and revelled in the success.

He had some very good ones to choose from but the fundamentals of the plan was, in his eyes, much bigger than any of them and that meant there would inevitably be victims, with Liam Brady likely from an early stage to top the list.

Brady was clearly not the player he had been in September ‘89 but it is still hard to imagine that any Irish manager of the team could have ditched the country’s most talented footballer at that particular point in time. Charlton, though, felt it needed to be done.

There really is no excusing the way he did it, however, humiliating the midfielder so as to make his point by substituting him 35 minutes into a friendly with West Germany and then claiming he should have done it after 15.

The manner of it was, however, seen as a firm statement of his authority and warning to others and the team marched on.

Though they had gone out in the group stage, the team never quite, in many ways, matched the achievement of the performance Germany in 1988, the country’s joyous first ever appearance at a major international championship.

There was huge pride taken in the win over England and the nature of the displays against the Soviet Union and the Netherlands, in part because of the surprise the team had generated abroad. By the time Italia’90 came around the Irish people were ready for the party but there were plenty of highlights with some outstanding results and no end of stories.

By the qualifying stages of Euro ‘96, the cracks were obvious, though, and the second competitive home defeat of his reign, against Austria, confirmed the growing sense that the team was running out of steam and so his time was running out.

The manner of the defeats at the end of that campaign, though, first in Portugal in November then the following month to the Dutch at Anfield, made his Ireland side look suddenly hopelessly anachronistic. Two more tactically developed teams that capitalised on the abilities of technically gifted players looked entirely untroubled by Ireland’s approach.

The pity of it was that he did not see or publicly recognise that he had stayed too long or that those in charge simply had to move on. The level of expectation faced by the managers who were to succeed him, though, would never be the same. The Irish public were now primed to the belief that their football team was entitled to a place at the game’s top table even if the rest of the world often wondered why.

1 The Offload: Schools rugby talk in the Seanad appears tone deaf
2 Ken Early: Frank Lampard’s problems start at number one
3 All in the Game: Klopp gets the last laugh in quiz show
4 Ronnie O’Sullivan records fastest win in Crucible history
5 Rory McIlroy admits missing the crowds as he looks to end Major drought
Real news has value SUBSCRIBE
Crossword Get access to over 6,000 interactive crosswords