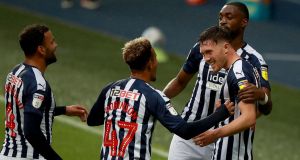 Dara O’Shea (right) of West Bromwich Albion celebrates with his team-mates after scoring against Derby County at The Hawthorns on Wednesday. Photograph: David Rogers/Getty Images

Republic of Ireland defender Dara O’Shea has expressed gratitude to West Brom boss Slaven Bilic for the faith shown in him over the course of the current Championship campaign. The young Dubliner has had a major impact as the club pushes for promotion back to the Premier League.

O’Shea got his second goal of the season in Wednesday night’s 2-0 defeat of a Derby side that had been pushing hard in recent weeks to get in among the play-off places. The near post header copper-fastened the home side’s grip on the game, and the win leaves them just a point behind Leeds at the top of the table with four games left to play.

The 21-year-old, who did well in League Two while on loan at Exeter City last season, looked very much a squad player at the start of this one. But, after getting a few opportunities over the opening half of the campaign, mostly in cup competitions, he has become a firm fixture in the side, starting 12 of their last 14 league games, eight of which – including the last three – West Brom have won.

“Having a gaffer who believes in you and backs you and is willing to play young players in big games and in a big season like this is, I think it’s great,” said the defender after Wednesday’s win. “The confidence I have from him that even in training I can go out and express myself and he’s not going to give out to me. As long as I am doing my best I think he is happy with that as well.

As a young player you can have your ups and downs but he is very mature. He has got a plan

“We have got to take each game as it comes now. It’s four huge games that determine our season, really. But everyone is looking forward to it. In the changing room everyone is up for it and knows what we have to do.

“I like that near post,” he added, in relation to the goal, his first at home for the club. “I think I can get a lot of joy there and I saw the space there and no one was really marking me so I took my chance.

“I scored a similar goal away [at Millwall in February] but it was nice to score here at The Hawthorns. It was something I’ve been wanting to do since I signed here. Unfortunately the fans weren’t there today but it was still special, and a huge win.”

Earlier this week, Bilic had lavished praise on the Under-21 international, hailing his maturity and his composure under pressure.

“Dara is clever – he thinks about the game, nothing surprises him,” the manager said. “He has a good touch but he still keeps things simple. He could complicate things but he doesn’t.

“The other things like motivation, focus, that little of self-confidence that you need – I saw that with Dara in the first week of training.”

At Under-21 international level, O’Shea had been a firm favourite of the then manager Stephen Kenny, having played every minute of every European Championship qualification game in a campaign that had been going very well until he was sent off away to Armenia for a foul committed late on to protect Ireland’s one-goal advantage.

He missed the only game Ireland has played since – the win over Sweden – through suspension. The defender, primarily a centre back who has also featured at right full for West Brom, was also prominent as Ireland did well in Toulon last summer, and he looks to be one of the strongest contenders from that side to earn promotion to the senior international squad.

Kenny also included Norwich’s Adam Idah among the players he sees as having the potential to make that step up when he spoke with the media on Wednesday. But the striker’s club manager, Daniel Farke, has suggested that the teenager needs time to develop after a season in which he has featured 12 times for relegation-bound Norwich but not scored since the hat-trick he got against Preston North End in the FA Cup.

“Adam is a great guy,” Farke said in an interview with the Eastern Daily Press. “At this age he is already there in the matchday squad and getting minutes. I don’t see any other club where he would have got this at the Premier League level.

“He is still a work in progress and he has to improve in many parts of the game, in his endurance and his ability to link the play. But he improves day by day and I am never scared to play young players.

“I can still remember after Adam scored at Preston I was hearing he will help us stay in this league. Then he starts at Manchester United in the next game and we lose 4-0 and he was seen as too lightweight and maybe in a few years he will be ready. I won’t go over the moon or be too critical. Let’s take some responsibility off the young lads if we can.

“They have to carry us with their performances but they should not be responsible for carrying the spirit of the team as well, not in the greatest league in the world.”