‘He was the sporting father figure we needed - and wore a peaked cap, like our actual fathers’ 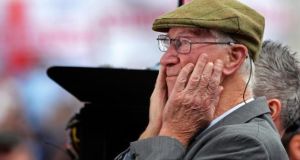 Jack Charlton acknowledges cheers from the crowd at the Aviva Stadium in Dublin in 2015. Photograph: Eric Luke/The Irish Times

Jack Charlton was not first-choice for Ireland manager, or even second, as everyone knows. He benefitted from one of our great national traditions: the split. Then, also in true Irish style, he was elected on transfers.

But it didn’t take us long to realise that he was the sporting father figure we needed at that point in the country’s life. It helped that he wore a peaked cap, like most of our actual fathers.

It also helped, given his nationality, that he was from Northumberland, the Inishowen of England, most of which is north of Hadrian’s Wall and some of which looks south to Scotland. He was as far removed from the Home Counties establishment as you could be.

The accent didn’t hurt either. Even by Northumbrian standards, Charlton’s native Ashington is noted for its unique relationship with English. According to one joke, an Ashington woman goes to an out-of-town hairdresser and asks for a “perm”, so the hairdresser starts reciting: “I wandered lonely as a cloud.”

Still, many Irish fans remained sceptical about Big Jack until one night in 1987, the second year of his reign, when a man named Gary Mackay scored a late goal in Sofia during a game Ireland were not even playing. That’s when we realised that, in Charlton, we had also acquired a lucky general. Jackie’s Army would never lack recruits thereafter.

The greatest achievement of Euro ’88 and Italia ’90, arguably, was to unleash the Republic’s football supporters on the international stage. As they soon proved, they were performers in their own right, independent of the team. And unlike other armies at the time, they always came in peace.

The extent to which Charlton’s Ireland were the sporting wing of the peace process may be overstated. That his decade in charge started during some of the darkest days of the Troubles and ended during the first IRA ceasefire is mostly coincidence.

But his army of fans, at least, were on a UN-style mission, determined to prove that what the no matter how much beer they drank in the many foreign cities he brought us to, violence would never result.

The contrast with a certain other nation’s supporters was always a subtext. Not until Charlton’s last year as manager was it forced into the spotlight when, on a terrible evening in 1995, he stood on the pitch at Lansdowne, shocked and shamed at what some of his supposed countrymen were doing.

On that occasion, as so often during his reign, the fans in green responded with: “You’ll never beat the Irish”, a chant that had come to sum up the Charlton era in more ways than one.

Despite the famous wins in Stuttgart and the Giants Stadium, the quintessential result of those years was the 1-1 draw, preferably snatched from defeat with a late equaliser, which could then be celebrated as a moral victory.

The fact that our supposed betters had again failed to vanquish us was enough. But when we did eventually lose, in Gelsenkirchen, Rome, and Orlando, Jack was always forgiven quickly. We were never so spoiled by success as not to appreciate the achievement of just getting there.

For his record against England alone — one win, three draws, one game abandoned with Ireland leading – Charlton would have earned sporting immortality Ireland.

There was a personal edge to that for him, because when he had applied for the England job years earlier, he was not considered sufficiently of the right stuff even to merit an interview. Knowing that he shared at least some of our historic grievances with London was yet another reason for Irish people to love him.

Maybe he should have received a knighthood in his native country, as many argue. But he was showered with all the honours we have in Ireland, modest as they are, up to and including a standing ovation from the new Aviva Stadium when he returned there in 2015.

Back on the pitch, 20 years after the riot, he seemed overwhelmed by the affection. Holding both hands to his face, as if to contain the emotion, he looked like a bashful child at an awards ceremony. In fact, he was 80. But then again, the undying gratitude of your adopted country is certainly a big prize.