Ljungberg brushes off questions about his future at Arsenal

‘My job is to go from day to day, game to game, to try to help this fantastic club’ 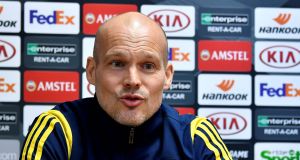 Freddie Ljungberg claims his future prospects as the Arsenal head coach have not come up in conversation with the club’s hierarchy, even though there is little sign of a quick appointment to replace Unai Emery.

Arsenal remain unflustered about the idea of Ljungberg continuing in his interim role indefinitely, a state of affairs that was helped by their 3-1 win at West Ham in his third game in charge on Monday night.

While names such as Carlo Ancelotti – mentioned in connection with the job after his sacking by Napoli on Tuesday night – hold popular allure, the club’s priority is to make the right appointment, and they retain confidence in the Swede’s ability to stabilise a tumultuous season while they take their time compiling a shortlist. Although it is understood Ljungberg would like to take over on a permanent basis, he has been inscrutable on the subject in public since being asked to step in last month.

Asked whether he saw himself as a contender, he reiterated that he is only looking as far as the next match, which takes place on Thursday night against Standard Liège in the final round of Europa League group stage fixtures.

“That’s not a conversation I’ve had with the bosses,” he said. “My job is to go from day to day, game to game, to try to help this fantastic club. That’s what I try to do. All of those decisions are up to the top dogs.”

Ljungberg struck a similarly diplomatic tone, albeit with a hint of frustration, when he was asked specifically about the availability of Ancelotti and the former Chelsea manager’s potential suitability for the role. “I’ve been asked this question a lot since I took over and I just try to concentrate on my job – that is to win football games and get us to play better football. What the club decides to do is totally up to them, but I stay totally out of it.”

That victory at the London Stadium, earned with three goals in nine second-half minutes, was a release after nine games without a win, Arsenal’s worst run in 42 years. Ljungberg admitted his players had looked tense before that and – adapting a phrase beloved of his old manager Arsène Wenger – hailed their bold approach in brushing West Ham aside.

“You have to relax, dare to be football players, be brave,” he said. “They let that handbrake go and all of a sudden they played really good football.”

A performance of basic competence in Belgium would be enough to put them in the last 32 of the Europa League, given that only a five-goal margin of defeat could jeopardise their continued interest. In contrast with Emery, Ljungberg chose not to sanction the release of Arsenal’s squad list in advance of the game. But he has a number of selection headaches and was dealt a significant blow earlier in the day when the club confirmed Kieran Tierney, who dislocated his shoulder at West Ham, will miss the next three months.

Granit Xhaka will also miss the match after a concussion on Monday. Nicolas Pépé is absent with a knee issue and Héctor Bellerín’s hamstring problem keeps him on the sidelines. “One of those freak things,” Ljungberg said of the injury list.

“I try to see what players can do and not focus on what they cannot do,” Ljungberg said in what appears a fundamental tenet of his managerial approach. He may choose to assess the teenage defender Zech Medley, who is yet to play this season, while Reiss Nelson and Emile Smith Rowe are among other fringe players likely to receive extended playing time.