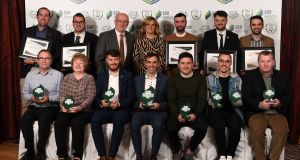 One of the Football Association of Ireland (FAI)’s largest remaining sponsors, SSE Airtricity, has said recent developments at the association are “a matter of serious concern”.

The utility company, which sponsors the League of Ireland and underage football, as well as acting as energy partner to the international team, has a contract with the FAI until the end of next year.

In a statement released to The Irish Times, the company said “notwithstanding our current sponsorship agreement, ongoing governance developments at the association are a matter of serious concern which we are continuing to monitor, and we remain in discussion with our sponsorship partners”.

The SSE statement will raise questions over the future commercial arrangements between the FAI and one of its headline sponsors. It comes after shirt sponsor Three Ireland announced this week that it would not be renewing its deal with the association when it expires in July.

The telecoms company had been unsettled by the ongoing corporate governance issues at the FAI, but the sponsorship also did not fit with a wider strategic reorganisation planned at the Three headquarters in Hong Kong, which involves focusing on music sponsorship rather than sport.

Industry sources suggested that renewal talks on sponsorship deals usually kick off around a year before the deal expires, meaning the current controversy comes at a particularly sensitive time for the FAI’s deal with SSE.

“We continue to be focused on supporting clubs and teams at national and international level,” the SSE statement concluded.

The organisation has undergone yet another tumultuous week, which will culminate at midday today when it publishes its annual accounts for last year, as well as restated accounts for 2017 and 2016.

The new financial results, in addition to detailing the exit package given to the organisation’s former chief executive John Delaney, are expected to illustrate the gravity of the financial situation facing the FAI.

The organisation, which has seen its State funding frozen following recent controversies, has been relying on financial assistance from Uefa since earlier this year. The first in a series of forensic financial investigations of the FAI, which was commissioned by Sport Ireland, was referred to the Garda last week after its final draft had been delivered.

The Government is likely to watch today’s events closely, though according to one senior source, the expectation is that the accounts presented will be “horrific”. Significant concerns about the financial state of the organisation persist, as well as unhappiness over its governance, underpinning the continuing unwillingness to restore funding to the FAI.

Earlier this week, John Foley, the man who was expected to take over the chief executive’s role at the FAI , said he would not be taking the position due to a lack of support from stakeholders. Minister for Sport Shane Ross effectively blocked the appointment, before Paul Cooke, the organisation’s vice-president, stepped into a role as “executive lead” at the FAI.

According to one senior figure in Government who has been briefed on the issue, the organisation “still has its head in the sand”.

The Department of Sport is known to be especially concerned about how the organisation selects its next chief executive.

“Their mindset is ‘Who is the next FAI guy we can get?’” said one source.

Mr Ross has told people in Government that the next chief executive should be someone from outside the organisation and possibly the country.

“It can’t be from usual suspects,” a source said.

The Government expects four new independent directors to be announced shortly, after which a process will start to select the new chief executive.

Mr Cooke, an accountant and former newspaper executive, will present the accounts at a press conference today, alongside FAI president Donal Conway.

1 Six Nations - Ireland v Italy: Kick-off time, TV details, team news, standings and more
2 Dan Leavy gets back in the thick of things as Leinster trounce Zebre
3 Colin Byrne: Hard to understand how golf has become the bogey man now
4 Irish duo set for AFL Grand Final as sport lifts the gloom Down Under
5 Here is your handy guide to sport on television this week
Real news has value SUBSCRIBE
Crossword Get access to over 6,000 interactive crosswords