Pep Guardiola’s side steady ship after defeat to Manchester United 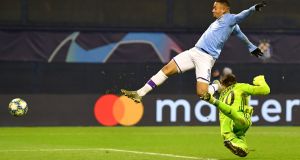 Gabriel Jesus was Manchester City’s star performer with a hat-trick that made it 500 goals in an impressive 199 games of Pep Guardiola’s management.

Yet with Phil Foden pulling the strings – and Dinamo Zagreb around – from midfield the No 9 had admirable support on a night when Benjamin Mendy also gave a reminder of why he was signed.

City were already in the last 16 as Group C winners but required a morale-boosting win after a dire run of form. For this challenge Guardiola retained Rodri, Jesus and Ilkay Gundogan from Saturday’s loss to Manchester United, made Foden’s 50th City appearance a fourth start of the term, and handed Eric García his full debut in the competition.

The number of changes, and City having already qualified, meant this outing might not prove the best barometer of form and mood. And the way in which Nicolás Otamendi, Wednesday’s captain, lost Dani Olmo before he volleyed Damian Kadzior’s ball straight past Claudio Bravo was the latest addition to a catalogue of defensive calamities. The No 7’s finish was supreme but questions were again asked regarding a rearguard who have now kept only one clean sheet in their past 12 matches.

For a packed Stadion Maksmir this was the dream start – the City fans apart – as Zagreb required victory to have any chance of qualification. For the visitors it was poor yet in Foden there was a player who began zipping the ball through midfield allowing City to launch the quick attacks Guardiola desires.

One angled pass to Mendy allowed the left-back to whip in a cross that had Jesus leaping and Dominik Livakovic punching away just in time. Olmo might have scored once more when running through on goal – Otamendi again could not get near him – but he blasted his shot over. Next Olmo’s flick found Mislav Orsic and this time Bravo saved the header.

What City had lacked in the run of two wins in seven matches was a lack of quality in “the boxes”, as Guardiola says. An illustration of the missing element required came via the equaliser. Riyad Mahrez swept the ball into the back post from the right and Jesus was lethal with his head: simple and effective.

The goal angered Zagreb, though, as Emir Dilaver had gone down during the build-up yet though players surrounded Carlos Del Cerro Grande, the referee ruled the goal legitimate and booked Arijan Ademi for his part in the protest.

This was an admirable riposte from City in a hostile venue and ensured the score was level at half-time: the break came at a good time as the ill-feeling continued when Amer Gojak might have been sent off for an elbow on Rodri. The No 14 was not even booked.

At this juncture City were ensuring unbeaten progress to the next round and Zagreb were going out. Yet Guardiola’s side pride themselves on a winning intent and this was signalled by a Foden shot that, while too high, warned their hosts.

Next they carried the threat through via some delightful footwork from Jesus. Foden’s slick ball-play put the striker in near goal and after some Fred Astaire-like feet he allowed Livakovic no chance with his finish.

This had Guardiola double-fist pumping and posed a question of Zagreb they would surely find difficult answering. So it proved as the excellent Foden fed Mendy and his equally impressive cross was stabbed in by Jesus for his third. It was secured on an evening when the opener had made him the youngest Brazilian at 22 years and 252 days to hit 10 Champions League goals, beating Neymar’s previous mark.

From here it was a keep-ball exercise for City before Foden scored a deserved late fourth for a team who could be proud of the character shown.

It will raise spirits ahead of Sunday’s trip to Arsenal yet such has been the faltering form that there would be no surprise if City were to struggle in that Premier League match. - Guardian