Ken Early: Why Mo Salah has to win Player of the Year

De Bruyne’s the better all-rounder, but the Liverpool striker is astonishing 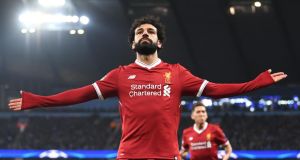 It was getting towards the end of a lengthy Pep Guardiola press conference on Friday by the time the question came up, so maybe the Manchester City manager was getting tired and it was just a coincidence that he sighed deeply at the mention of the phrase “shortlist for the Player of the Year award”.

The journalist wanted to know if Guardiola thought David Silva should be on the list. Remarkably, a player rated by a lot of City fans as the best ever to play for their club had never made the final six.

“I’m not a big fan of these situations. You know my opinion,” Guardiola said. “When they come to say man of the match, okay, you have to respect that, but I don’t believe in that, believe me. So I think, of course I would like all my players to be there, because you know how I appreciate them, but . . . [soccer is] not individual. If one player plays good, it depends on the other ones.”

“David is so normal guy, he prefers to have the recognition for the team-mates or the staff of the people around. Of course he would like to be there, but it doesn’t change too much his life, I think.”

José Mourinho is scarcely less critical of the concept. “This kind of trophy” – the Ballon d’Or – “is not good for football. This is why I don’t care about it. Sometimes it looks like we are looking for stars, we are looking for some people to be more important than others.”

Mourinho doesn’t usually seem overly troubled by the notion that some people in football might be more important than others, and it’s a long-standing grievance that he so seldom wins the Manager of the Month award, but his irritation with the fact that many players seem more motivated by individual rather than team glory seems genuine enough. He has not enjoyed the smoothest of relationships with Paul Pogba, who once declared that his biggest goal was to win the Ballon d’Or rather than, say, the World Cup or the Champions League.

Yet although Guardiola says that David Silva is a “normal guy” who would rather the recognition went to his team-mates and the staff, you have to suspect that he would be even more normal if he preferred the accolades to go to himself.

You don’t become a top soccer player without being competitive, and if they are competitive collectively it is natural enough that they should be competitive individually, too. Take Cristiano Ronaldo, the fiercest individual competitor the game has ever seen. When you see Ronaldo react with indifference or even exasperation to a team-mate’s goal it seems contrary to the spirit of football. But without this almost insane drive to distinguish himself he wouldn’t be Ronaldo.

Compared with Ronaldo, Mohamed Salah seems gentle and easy-going. But recently we’ve seen flashes of the driven, selfish individual competitor within. When Harry Kane was awarded the disputed goal against Stoke, Salah took to Twitter to question the decision, and followed that up with a performance against Bournemouth that suggested he was every bit as obsessed with winning the Golden Boot as Kane is.

Perhaps this focus was to the detriment of his overall contribution, as he rushed his shots, or shot when team-mates were better positioned. Of course this struggle ended with a brilliant headed goal, because right now nobody can stop Mo Salah.

Kevin De Bruyne spoke earlier in the season about how a player feels great for the first 10 matches, then okay for the next 10, and after that like shit. He must be one of many players wondering how Salah seems to be getting better as the season goes on. It’s not as though Salah started badly – he scored on his debut, and continued with nine goals in his first 15 matches – but back then there were nearly as many memorable misses and fluffed chances, including a couple in Liverpool’s traumatic 5-0 defeat at Manchester City, as there were goals.

But about three months into the season he moved to another level. Many of his early goals had been opportunistic – scoring tap-ins from rebounds, or finishing after escaping into space behind the defence. Now he was taking on and destroying defenders as well. Of the 31 goals he has scored in 30 matches since November, 12 have come after he has beaten one or more men on the way to goal. His goals against Everton, Tottenham and Watford in particular have been so beautiful as to be almost ridiculous.

If the award should only go to the player whose team has won the major titles, most players are automatically ruled out of the running

There are a couple of reasons why Salah still might not win the PFA Players’ Player of the Year award. First, the players vote in February or March, depending on how organised they are, and De Bruyne was clearly the best player in the first half of the season. His performance in September against Chelsea at Stamford Bridge, crowned with a stunning left-footed winner, was perhaps the finest individual display of the campaign, and from that moment on most people had little doubt that City would be winning the title.

There is also an argument that, despite Salah’s astonishing form, De Bruyne remains the better all-round footballer. As Eden Hazard said when revealing that he had voted for De Bruyne: “I could have also voted for Salah because I played with him and he’s my friend, but Salah is more a striker than a player.” And there are many who agree with Arsène Wenger’s view that the award should be won by the player who has driven his teams to titles: De Bruyne has been the best player in the title-winning team; therefore he is the rightful winner.

But however Guardiola and Wenger might like it to be, the award is for individual rather than collective performance. If the award should only go to the player whose team has won the major titles, most players are automatically ruled out of the running.

De Bruyne has performed all season under immense pressure; he has delivered on every expectation, and the strength of character required to do that should never be underestimated. But Salah has done what nobody could have expected: he has astonished the football world, and even though his team were miles off winning the Premier League, it seems right that he should be recognised as the season’s outstanding player.