Ken Early: Chelsea are just a collection of parts, not a team 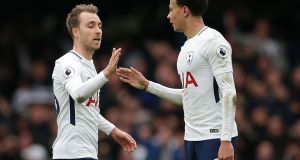 The difference between where Spurs and Chelsea are at right now was vividly illustrated by two moves in the second half at Stamford Bridge yesterday.

On 66 minutes, Eric Dier got the ball at the back, thought about hitting a ball towards Son Heung-Min on the right, then decided to hit a hard straight pass into midfield where Christian Eriksen had found space behind Cesc Fabregas. As the ball reached Eriksen he could see that Son had already taken off down the right, and he guided the ball into the Korean’s path with a precise first-time pass between Anton Rüdiger and Marcos Alonso. A few seconds later Spurs had scored their third goal and, in Chelsea’s heads at least, the game was over.

Ten minutes later, Eden Hazard ran at the Spurs defence, drew a couple of defenders then played a no-look pass to his left, where he was obviously expecting Marcos Alonso to be making an automatic run to attack the space. But there was no sign of Alonso: Chelsea’s automatic doesn’t work any more.

You could see that Spurs are a machine with all the parts working together, while Chelsea are just a collection of parts.

This time last year Chelsea were top of the league. There is no single reason why they have fallen so far. We know that Antonio Conte will almost certainly be mutually consented at the end of the season: it’s Chelsea, the coach gets the blame. And yet Conte will walk straight into another job with a major club, maybe a bigger one than Chelsea.

The most obvious reason is that Chelsea played beyond themselves last season, so a regression to the mean was to be expected. But the changed composition of the team is also important. Seasoned players like David Luiz and Nemanja Matic have given way to relatively inexperienced ones in Andreas Christensen and Tiemoue Bakayoko: these players might one day be better than the ones they replaced, but it was too much to expect them to be at the same level immediately.

The loss of edge has been most obvious in the centre-forward position. Last summer, having been beaten to the signing of Romelu Lukaku by Manchester United, Chelsea bet big on Alvaro Morata, and it hasn’t really worked out.

Morata’s struggle goes to show how hard it is to predict which players will adapt quickly following a big international move. He had already played in another country with Juventus, he appeared to have all the mental, physical and cultural tools required to adapt. Certainly he seemed better equipped to make the switch than was his predecessor, Diego Costa.

Even those Chelsea fans who loved Costa would not kid themselves that he loved the club back. Clearly he was not what you might call a good company man. The reason the fans loved him anyway is that it was never just a job to him. Every time he went onto the field it was personal, and this competitive edge was a huge reason why Chelsea won the league in two of his three seasons in England.

Compared to Costa, Morata has been stable, polite, and underwhelming. He could take heart from the examples of players like David de Gea and Roberto Firmino, who were criticised in their first seasons in England and are now considered to be among the best players in the league. But it remains to be seen whether that option appeals to him: he might prefer to cut his losses and start again somewhere else.

That is also the impression you get from Conte, who does not come across as a man who is desperate to stay in the job. Whenever he is asked about his future his demeanour becomes resigned and fatalistic; he is not trying very hard to look like he believes that if only he gets one more chance, he can turn this situation around.

He knows that at Chelsea, if you don’t win, you get fired. Winning today is the only thing that counts. And it is beginning to look as though this obsession with immediate, tangible success might be another reason why they have, for the second time in three seasons, followed a title-winning season with a poor one.

Like most of the other teams trailing behind Manchester City, Chelsea and Spurs already knew 10 games into the season that they weren’t going to win the title. But this knowledge meant different things at either club. Spurs knew they could still have a good season. Chelsea knew that the campaign was already a write-off: it was about limiting damage and apportioning blame. Here we are in the spring, with Spurs wishing the season wasn’t about to end, and Chelsea wishing it was over already.

Some would argue that the fact Chelsea win more trophies than Spurs is not unrelated to the fact that Roman Abramovich is demanding and ruthless, while Daniel Levy is prepared to accept excuses like “we are building something here, it’s all about the process”. But Chelsea didn’t enjoy all that success because Abramovich demanded it. They won because he paid for it.

If you want to act as though you are entitled to win the title every year, sacking even very talented managers the moment they fail to deliver, you had better be the biggest-spending club in the league. Chelsea used to be that club, but that hasn’t been the case for a few years. If Abramovich has decided that he is no longer going to compete in the transfer market for the best players, it’s time he allowed his club to be run with a more tolerant, less trophy-fixated outlook – an attitude more in keeping with their status.