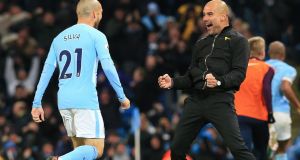 Pep Guardiola and David Silva celebrate a win against Southampton in what has proved a triumphant league campaign. Photograph: Lindsy Parnaby/AFP/Getty Images

The statistics offer some measure of Manchester City’s greatness.

They have won the title with a month to spare and are on course to set records for points gained and goals scored. Achieving that in an era when there is, theoretically at least, a big six – when they are not just steamrollering much weaker sides – is extraordinary.

But the stats are only part of it and probably not the main part. One does not have to be José Mourinho or one of his acolytes to realise that, with the money City have spent in the two years since Pep Guardiola took over, a failure to challenge would have been an intense disappointment. But it is the way that money has been spent that marks them out.

City may have outlaid a net £360m under Guardiola but their most expensive player is Aymeric Laporte, brought in for £57m. They have not done what Paris Saint-Germain have done – or even what Manchester United have done – and spent a huge amount on a couple of big-name players.

Rather they have targeted their spending so well that when Mourinho started sneering about City’s purchase of £50m full-backs, the barb rebounded and highlighted the fact that his two preferred full-backs are both 30-something converted wingers.

There was a joke doing the rounds last summer that featured Guardiola excitedly telling Sheikh Mansour, City’s owner, that he could win the league title with the most beautiful football imaginable and that all he needed to do that was the best two players in the world in every position. And that, essentially, is what has happened.

There will always be those who see the money spent as detracting from the beauty but Guardiola has also improved players and he has blended them to accentuate their assets. Yes, money has been spent but City have got full value for it.

And that is the wonder of this City team. The statistical milestones do not tell the full story. They are not definitive. The record points tally is, for now, held by Mourinho’s Chelsea in the first season of his first spell, 2004-05. They were, without doubt, a very fine side, one of the best of the Premier League era, but did they stir the heart as City have?

Perhaps they did, with their organised muscularity enlivened by Damien Duff, Arjen Robben and Joe Cole. Aesthetics, after all, are to a large extent subjective.

It is entirely reasonable to argue for the thrill of the United treble-winners of 1998-99 with the contrasting wing-play of David Beckham and Ryan Giggs and the intermovement of Andy Cole and Dwight Yorke. Or for the blend of pace and finesse in the Arsenal Invincibles side of 2003-04.

Or, reaching further back, the sudden blossoming of Liverpool in 1987-88, when the signings of John Barnes, Peter Beardsley and Ray Houghton complemented John Aldridge and added a swagger to a unit that had previously been largely efficient with moments of brilliance. But that is where an aesthetic evaluation strikes a problem.

Spectacular as that Liverpool were – as exemplified by their 5-0 win over Nottingham Forest in April – and although they got to the FA Cup final, it would be hard to make a case that they were better than, say, the side of 1983-84 that did the treble of European Cup, League and League Cup or the 1976-77 side that won the European Cup and the League and lost in the final of the FA Cup.

They might have been prettier but would they have beaten them in a head-to-head game?

A case could even be made that by encouraging a more fluent style Kenny Dalglish began the turn away from the Liverpool Way. Other factors were at play, of course, but Liverpool have won only one title since and that 87-88 side will always have a question mark against them because the Heysel ban meant they were untested in Europe.

United’s 98-99 side, similarly, were memorable because of the number of moments of extraordinary drama in which they were involved but would they have beaten the United of 2007-08 with their fluid attack of Cristiano Ronaldo, Carlos Tevez and Wayne Rooney, and a defence that leaked only 22 goals in the league that season, 15 fewer than in 98-99?

The best sides marry thrills and aesthetic pleasure with effectiveness. Those on the highest levels of the pantheon combine being good to watch with consistency and a capacity to get the job done in difficult conditions. City, perhaps, have been almost too good this season. They have won the league with such ease that it is hard to point to one defining game when they have been pushed to the limit and have found the inner strength to win despite adversity.

There is a vulnerability to City and just because Liverpool are the only side really to expose it for long enough to take advantage this season does not diminish the flaw, particularly when it is such a recurring theme for Guardiola sides.

That is useful as a way out from the back – and Ederson’s calmness in possession has been a major feature, notably at home against Tottenham when he bypassed the press with a string of accurate long passes – but also gives City protection against the counter; although, as the Champions League games against Liverpool suggested, perhaps not enough.

City’s domination of the channels at one end of the pitch has been their triumph; at the other end their failure to dominate them has been their undoing.