At a Foreign Affairs committee a Labour MP claimed that Putin would use the World Cup like 'Hitler used the 1936 Olympics'. Video: Parliament TV 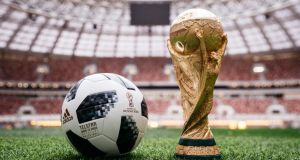 The terrible and unnecessary new World Cup ball allows some people to complain about the game’s enslavement to capitalism; others take the chance to reminisce about their own favourite balls of times gone by

It’s the same every four years. A couple of months before the World Cup finals, the new tournament ball is used in international friendlies, and the world’s top goalkeepers all start complaining about how bad the ball is. It’s too light, or too fast, or it moves through the air in a weird way; someone always compares it to one of those cheap foam balls you buy at a seaside supermarket.

The terrible and unnecessary new ball allows some people to complain about the game’s enslavement to capitalism; others take the chance to reminisce about their own favourite balls of times gone by; most agree that the ball will be bad news for goalkeepers, unless it will be worse for strikers, and by the second week of the World Cup everyone is bored of the ball conversation and there will be no more ball talk for another three years and nine months.

The story has been recycled so often that it has become an indispensable part of the World Cup build-up, one more component of the time-honoured quadrennial ritual, reassuring in its familiar rhythms. It’s like the weather reports from the North Pole that they play on the radio news on Christmas Eve.

Another time-honoured aspect of the World Cup build-up is the months of criticism in the Western media of some problems or “challenges” in the host country, often not football-related but usually at least football-adjacent, that threaten the success of the tournament.

In 2002 – a less interconnected age – the narrative was: the World Cup has stepped into the unknown. Does anyone in Japan or South Korea know anything about football? The tickets will be sold, but will the masses of spectators have the first idea what they are looking at? Will they know how to create a real World Cup atmosphere? (They did).

In 2010 and 2014, the stories focused on crime and poverty in Brazil and South Africa – would the travelling fans be safe (they were), and was it right for such countries to spend so much money hosting a football tournament that would be over in a few weeks, leaving a legacy of deserted stadiums and ballooning debt? (It was not).

In 2006 the tournament was hosted by Germany, a rich Western country with outstanding rail infrastructure, with few obvious problems for foreign media to latch on to. That time the foreign media dwelt on how incompetent the German national team had become.

Why had the Germans lost their edge after so many years of relentless domination? Had years of peace and prosperity made German youth spoiled, plump and flaccid? And how would they cope with the mortification of flopping on home soil? (They didn’t).

Russia 2018 is an unusual case. Just when the World Cup challenge-narratives should be cranking into gear, it turns out that most of the headlines in the Western media already are about Russia and almost all of them are bad: spies poisoned, elections hacked, Europe destabilised, Syria bombed. In this context stories about Russian football’s racism problem are unlikely to make much of an impact.

Last week the British foreign secretary Boris Johnson suggested that Russia would exploit the World Cup for propaganda much as the Nazis exploited the 1936 Olympics. He was castigated for drawing a crass and stupid analogy between Vladimir Putin and Hitler.

Yet Johnson did not really do that, and this comparison was not one of his worse errors. You don’t have to believe that Russia is secretly planning a genocidal war of world conquest to perceive the parallels to which he was referring: international sport granting an aggressive and untrustworthy regime an opportunity to show off before the world.

A more pertinent criticism of Johnson’s claim is that Russia’s 1936 moment already happened four years ago, when Sochi hosted the 2014 Winter Olympics.

From the point of view of propaganda, the Olympics is much better than the World Cup, in that the Olympic host nation has the extravagant canvas of the opening ceremony to tell some kind of story about itself (a feature of the Games that was first explored to maximum effect in 1936). World Cup opening ceremonies are street theatre next to the national epics you now expect to see at the Olympics.

2008 and 2012 saw stunning displays at the summer games in Beijing and London as China and the UK staged massive celebrations of their history and culture. A new book by the Guardian’s former Moscow correspondent, Shaun Walker: The Long Hangover: Putin’s New Russia and the Ghosts of the Past makes an interesting point about the Russian opening ceremony at Sochi.

The performance featured episodes centred on Peter the Great, Natasha’s dance from War and Peace, Soviet industrialisation and the liberalisation of the 1950s, culminating in Yuri Gagarin’s flight into space. As Walker points out, Gagarin’s flight happened in 1961, and nothing of Russia’s history since then had been deemed worthy of inclusion. It looked as though the organisers felt the intervening 53 years had produced nothing to be proud of.

“In a way, the final event in this journey through Russian history was the opening ceremony itself,” Walker writes, “a symbol of [Russia’s] return to the ‘top tier’ of nations that its president had called for fourteen years earlier.”

Yet as we know, the message did not stick. Western commentary on Sochi continued to focus on issues like homophobia and corruption, and those games are now remembered chiefly for the massive Russian doping operation that was exposed later.

Given all that has happened since then, it seems unlikely that the Russian government still holds out much hope for the propaganda potential of the World Cup. This is not to say that the tournament cannot help at all. Tens of thousands of foreigners who would otherwise never have visited Russia will go there and find that it is not as terrifying or alien a place as they have been led to believe. But it will be the country and not the presentation of the tournament that does the persuading.

1 Pete Sampras: The forgotten great with the best serve in the business
2 Super Rugby AU offers glimpse of rugby’s future if law changes are adopted
3 Tipping Point: DeChambeau’s transformation raises questions, but who will ask them?
4 Cam Newton broke the mould: Can his flame be rekindled at the Patriots?
5 Game Changers: How Jonah Lomu’s dramatic arrival heralded rugby’s new dawn
Real news has value SUBSCRIBE
Crossword Get access to over 6,000 interactive crosswords