Sunderland look to prevent Newcastle fans from turning up

In 1987 over 1,000 Newcastle fans turned up during Sunderland’s relegation play-off 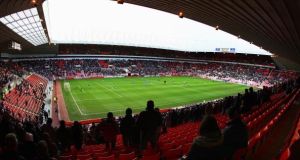 Sunderland’s crowds at the Stadium of Light have dropped sharply this season. Photograph: Clive Rose/Getty Images)

Sunderland have taken discreet steps to prevent gleeful Newcastle fans from turning up at the Stadium of Light and mocking Chris Coleman’s struggling side during their final two home games of the season.

With Sunderland looking certain to drop into League One, chatter on social media and fans forums suggested Newcastle fans had planned to attend the home matches against Burton and Wolves in order to gloat.

Aware of this Sunderland – seemingly bound for a second successive relegation – had no cash turnstiles open for Tuesday’s 1-1 draw with Norwich and are expected to do likewise for their next two home fixtures.

In 1987, when the Wearsiders were demoted to the third tier for the first time in their history, more than 1,000 Newcastle fans appeared at Roker Park to cheer on Gillingham during the play-off second leg which they won on away goals, consigning Sunderland to the old Third Division.

In order to prevent a repeat, tickets for the Burton and Wolves games will have to be bought through the ticket office where staff are likely to insist on evidence of a history of attending games at the Stadium of Light. This policy should screen out mischief-making Newcastle supporters.

With Sunderland’s crowds having dropped sharply – (a crowd of only 24,894 attended the Norwich game at a ground which averaged well over 40,000 a match during its decade in the Premier League) – it represents a fairly drastic measure. Yet although relations between fans of the rival north-east clubs have improved significantly in recent years, seats were smashed during a Tyne-Wear altercation at an under-23 game at Sunderland last month.

Six points adrift of fourth-bottom Bolton, Coleman’s team are second bottom of the Championship and have only four matches in which to save themselves.

Ken Early: Guardiola eyeing what could be a last chance for European glory with City 06:00
Galway’s ‘massacre of a beating’ on Tyrone a statement of intent to Dublin 06:00
Magic Wand in the running to conjure Riyadh win 06:00
Six Nations: Pitch-perfect England expose character flaws 06:00
Donegal rue missed opportunities as Dublin survive again 06:00