Ken Early: Solskjaer and United seem to be making it up as they go along 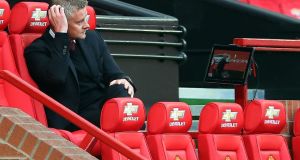 In fairness to Ole Gunnar Solskjaer, there are not a lot of things you can say that will sound impressive after you’ve lost 6-1 at home to a team managed by the guy you replaced. But in victory and defeat alike, it always helps if you don’t contradict yourself from moment to moment.

Speaking to Sky Sports after the game, Solskjaer poured scorn on Eric Lamela for going down after being struck in the face by Anthony Martial as though he had taken a much heavier punch. He said that if one of his own players did that, he’d hang him out to dry. In the very next sentence, Solskjaer said that if only Martial had gone down the way Lamela did after the initial elbow-shove from Lamela that provoked Martial’s response, the red card might have gone the other way.

And then what? Solskjaer would have hung him out to dry? What are his players supposed to think? José Mourinho’s players know what he expects from them: he wants them to remember to be “c***s” at all times. So Lamela sank gratefully to the ground as Martial rose to the bait. Mourinho’s football philosophy might be unpleasant and unfashionable, but the messaging is consistent. You’re reminded of Walter Sobchak in The Big Lebowski: “Say what you like about the tenets of National Socialism, Dude, at least it’s an ethos.”

Continuing the post-mortem, Solskjaer remarked “They’re lucky now, the boys, some of them are going on international duty...” Moments later: “We don’t see each other now for 10 days. So that’s hard...” Well - is it good to have a break now, or isn’t it? It sounds like the United manager isn’t really sure either way.

Solskjaer’s habit of often sounding surprised by the end of his own sentences makes him unusual in an era when many of the top coaches have such a distinct personal brand and philosophy that you have a fair guess at what they are going to say about any particular thing before they ever open their mouths. In contrast to people like Jurgen Klopp, Pep Guardiola or even Mourinho, he seems to be making it up as he goes along.

This has been enough to hold down the United job in an era when they no longer demand to challenge for the title. The fact is, making it up as you go along is now pretty much club policy.

Ed Woodward has been in charge of United’s transfer policy since 2013, which is to say, throughout the entirety of the unsuccessful second half of the Glazer family ownership. It continues to astound how every summer transfer window can be the same kind of debacle. Every time there is hope that United, as the richest club out there, will flex the financial muscle that Woodward never stops boasting about and build on the promising signs the team showed the previous season. But then Woodward refuses to pay the world-record price he is invariably quoted for the superstar target he has fixated on, the deal turns into a saga, and the saga ends in worldwide rage as United scramble to bring in expensive backup options late in the window. This always seems to be an acutely uncomfortable and embarrassing experience for Woodward and yet he keeps letting the same thing happen over and over again.

The obvious conclusion is the chronic pattern of ‘failure’ in the market is not a bug, but a feature. We hear that United are desperate to sign Jadon Sancho - but how desperate are they really? Is there not also something to be said for being linked all summer with Sancho, but in the end holding on to your money? Winning trophies would be good for United’s bottom line, but the thing that counts for most is finishing in the Premier League’s top four. United are content to be best of the rest and wait, a couple of years if necessary, for Liverpool and City to come back to the pack. The coronavirus pandemic and the uncertainty it has created will hardly have increased the Glazer family’s appetite for taking risks in the transfer market.

And yesterday’s collapse could not be explained by the failure to sign Sancho. United’s fate was probably sealed by the timing of the double blow of the Martial red card and the third goal, conceded in disastrous fashion from a bungled goal kick almost immediately afterwards. But they had already given away two goals with mistakes - Maguire tackling Shaw to set up the first, then three defenders and the goalkeeper falling asleep to let Son in for the second. The sorry ineptitude of the defeat was summed up in the bizarre image of Paul Pogba sliding on his side into Ben Davies to concede the penalty for the 6-1. Pogba and Maguire may not have lived up to their billing as the world’s most expensive players in their positions when United signed them, but they are still better than they showed against Spurs. Their performances are their own responsibility, and Solskjaer’s, rather than Woodward’s.

The problem for Solskjaer is that after two defeats in the opening three matches the place in the top four already looks under threat. The only other time United ever lost 6-1 at home, Alex Ferguson said afterwards: “The impact will come from the embarrassment of the defeat. There’s a lot of boys in the dressing room today who will be feeling that, and we’ll expect an impact. Without doubt there’ll be a response to that.” With Ferguson around, you knew there would be. These days you can’t be so sure.