Ken Early: Questions for Messi – Why leave? And why City?

If anyone can maximise Messi’s strengths while covering his weaknesses, it’s Pep Guardiola 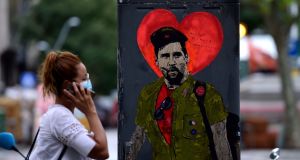 Six days after Lionel Messi told Barcelona he wanted out, the exit process is bogged down in legal claim and counter-claim.

Yesterday, La Liga announced that Messi’s contract remains valid and can only be rescinded if someone pays the €700 million release clause. Of course, La Liga is plainly not a disinterested party. If Messi leaves, the biggest stars remaining in the Spanish league will be Sergio Ramos – a central defender – and Diego Simeone – a 50-year-old in a suit.

Messi, for his part, seems to believe he is already a free agent, due to another secret contractual clause which, according to Onda Cero radio, gives him the right to cancel his contract before the start of the 2020-21 season.

One thing we know for sure is that if the best player in history walks out of Barcelona on a free transfer, when everyone had believed him to be under contract for at least one more year, it will be a debacle of unthinkable proportions for the president Josep Bartomeu. His name will live in infamy as an international byword for executive incompetence. Bartomeu will fight to avoid this outcome by any means necessary.

What does Bartomeu actually want? The ideal outcome for him would replicate what happened when Cristiano Ronaldo left Real Madrid: he could accept a nine-figure transfer fee, get the superstar’s wages off the books, and make it look like all of this is happening against his will.

The pandemic has blown a hole in Barcelona’s finances, and selling Messi would cut the wage bill by 20 per cent at a stroke. Remember that Football Leaks revealed Barcelona were paying Messi a guaranteed €106 million a year, once signing-on fees and loyalty payments were taken into account.

They are the world’s biggest club by turnover, with revenues in 2019 of €840 million. Some €383 million of that came from commercial income and much of that is down to Messi. If you want to understand why Messi is so attractive to sponsors, consider that as recently as one week ago, you had never heard of a Burofax. When you see the sums involved, Messi’s €106 million compensation actually seems in proportion to his contribution.

That doesn’t mean the commercial magic can instantly be recreated elsewhere. Juventus thought signing Ronaldo would transform their commercial prospects, but it hasn’t happened yet. Yes, Ronaldo’s first season saw their revenues jump by €65 million, including a €43 million rise in commercial income. Still, their total commercial income was only €160 million, less than half that of Ronaldo’s former club, Real Madrid. And since Ronaldo is costing €85 million a season over the four years of his contract, it’s hard to argue the deal has been an unqualified commercial success.

Signing a 33-year old Messi at these rates could make sense only for a club for whom money is no object. A club like . . . Manchester City, fresh from victory over Uefa’s FFP enforcers at the Court of Arbitration for Sport.

Operation Messi would not be about business. It would be about status: this is where the best player in the world has chosen to play.

City have in effect been the richest club in the world since the 2008 Abu Dhabi takeover, but status takes longer to grow. In 2009, they were ready to pay Milan £100 million for Kaka but the player turned them down. Then-chief executive Garry Cook recently told Sky Sports that he later ran into Kaka at Robinho’s wedding. “I asked him why he didn’t come. He told me, ‘I was at AC Milan and I had an offer from Manchester City – what would you do?’ and he was right.” Kaka wouldn’t make the same mistake again.

It still seems hard to believe that Messi is about to uproot himself from the club and the city where he has spent 20 years, to head north into the dark and cold and isolation of a Manchester pandemic winter, to take his chances in the Premier League at 33 years of age.

Really there are two questions here: the “Why Leave?” question, and the “Why City?” question.

Messi is leaving because of anger: anger at Bartomeu and the directors, anger at how his friends have been treated, anger at how he’s been blamed for the failings of the club. Anger is not the best reason to make a decision like this but it’s enough of a reason to make it, so long as it doesn’t cool down before the deed is done.

And why City? Three reasons: Money, strong team-mates, and Guardiola. It’s not because he loves him. He may not even like him. The attraction of working with Guardiola is not the opportunity for an emotional reunion. It’s that if there is any coach who can devise a system to maximise Messi’s strengths while covering for his weaknesses, it’s surely Guardiola.

Messi is still great at every aspect of football except running. His slowness doesn’t mean he can’t still be effective, even in the higher tempo surrounds of English football.

It’s about how the team is set up around him. The people running Barcelona don’t act as though they understand this. Messi knows that Guardiola understands.

He showed Guardiola he could compensate for his lack of pace by positioning himself correctly in relation to his team-mates. The system would take care of the rest.

Marriages of convenience can be underrated. By the end of Guardiola’s time at Barcelona, his relationship with Messi had grown cold. But since then, Messi has had a series of cold relationships with coaches. And none of them were as good at setting the team up as Guardiola.