Football in eerie, empty grounds has been reduced to a parody of its former self 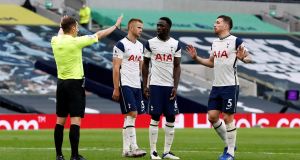 Tottenham Hotspur players surround referee Peter Bankes after he awards a penalty against Eric Dier for handball. As long as there is VAR, these micro-handballs will demand adjudication, and the only way to escape this is to stop using VAR. Photograph: Andrew Boyers/NMC

‘We have to get together,” said Steve Bruce, “as the managers, coaches, whatever it is, to go to the Premier League and say ‘this must stop’.”

What must stop? What Bruce meant was that the madness must stop. All these crazy handball penalties have got to stop. Everyone involved with the Premier League agrees; the handball rule is a disaster.

Except the problem is not the rule.

The rule is only a second-order effect of the real problem, which is VAR. VAR has shown us that football is, to a surprising extent, a game of micro-handballs. In the past referees dealt with them equitably, by failing to notice them. If it happened too fast to be perceptible to the naked eye, nobody worried about it. No body, no crime.

Now VAR spots everything that could possibly be a handball and demands to know what the referee is going to do about it.

There are two ways to deal with this situation. The first is to say that handball occurs when certain objective criteria are met: Did the ball touch the arm? Was the arm raised to shoulder height? Well then it’s handball – even if the player had his back turned the whole time, like Eric Dier against Newcastle yesterday.

The other alternative is to tell referees they must decide what does and doesn’t qualify as handball according to their subjective interpretation. When you see how angry the “objective” method has made everybody, you have to be grateful football decided not to go down the subjective route.

As long as there is VAR, these micro-handballs will demand adjudication, and the only way to escape this is to stop using VAR. Nobody has suggested that – everyone prefers to complain about the handball rule.

Roy Hodgson says it’s killing the game. Gary Lineker asked: “Can we have our game back please?” The best invective came from Jamie Carragher, after Newcastle had equalised against Spurs with a late micro-handball penalty: “It’s an absolute disgrace. An absolute joke... Whether it’s the Premier League, the FA, Fifa, Pierluigi Collina, whoever is involved in this, stop it, because you’re ruining football for everybody. Absolute joke.”

Carragher’s speech was so good you felt it was wasted on Sky Sports, really he should have been shouting this to a crowd of angry demonstrators at Trafalgar Square, before leading them off to ensure that these faceless football elites – whoever is involved – were finally held to account.

No doubt all the ‘handball killing the game’ talk was good fun, but it ignored a couple of salient facts. If you watched Spurs v Newcastle then you know the penalty drama at the end was the most exciting thing about the game. The match itself was one of the worst things anyone had ever seen; an empty and soul-suckingly inept affair contested by two sides who were nowhere near their best competitive shape.

Spurs at least made some effort to win – their 12 shots on target was the most they’ve had in a game under José Mourinho. This only made the absurdity of the final deus ex machina more cruel, more unjust, and, yes, unfortunately for Spurs, more entertaining.

Newcastle had played most of the match as though trying to defend a 1-0 defeat and had not had a single shot on target before Callum Wilson scored that 96th minute penalty equaliser. The thing everyone insisted was killing the game had actually provided its sole spark of life.

But there was something stranger still, which was that all this talk of handball killing the game was happening in the echoing eerie emptiness of Spurs’ world-class £1 billion stadium, into which they are currently not allowed to admit any supporters because of the pandemic which already shut world football down for months in the spring and, for all we know, could yet do so again this winter.

Spurs did not play in the Carabão Cup last week because their opponents, Leyton Orient, had too many players test positive for Covid-19. Orient only tested their squad because Spurs offered – insistently – to pay for the tests. They had played Mansfield a few days before with several of their players struggling with what their manager described as a ‘bug’. At that level, it seems, you just have to get on with it.

The other Carabão games showed lower league teams being thrashed by big club B-teams, a familiar symptom of the ever-growing systemic inequality which has been tearing at the game’s fabric for decades. Why is this competition being played at all? Because it offers a random few of the bankruptcy-threatened smaller clubs the chance of a cash windfall. Even at the top level, the only clubs that seem financially secure are those owned by billionaires or petrostates.

The Premier League staggers on, its poorly-prepared teams delivering shambolic matches to trigger payments from pay-TV companies that seem hardly less beleaguered themselves. This game, suddenly bathetic, deprived of the crowds that lend its aura of heroism, this game that’s been reduced to a parody of itself, clinging to its place in a decaying culture, amidst a collapsing economy, on a burning planet... this is the game that is now apparently in danger of being killed by the handball rule.

It reminds us, if we were ever in danger of forgetting, that humankind cannot bear very much reality.

Thank God we have the handball controversy to fixate on, as it forces our beloved sports celebrities to endure comical indignity and allows the rest of us to luxuriate in fiery and passionate denunciation. Long may we continue to get wound up about handball, which is so much more relatable than allowing ourselves to look too long at the big picture in all its overbearing bleakness.