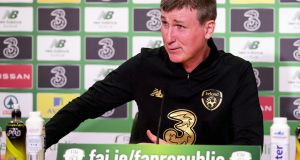 Stephen Kenny: “We’ve actually got to go and be progressive in the way we’re playing and try to win the game.” Photograph: Laszlo Geczo/Inpho

Having expressed the hope at the first press conference of this international camp that his Sunday would prove to be better than his Saturday had been, Stephen Kenny seemed to get his wish.

There were no major additions to his injury list arising out of the day’s fixtures in England which instead provided a first league goal of the season for David McGoldrick.

It was no perfect day for the Ireland manager – Matt Doherty didn’t feature for Tottenham nor Darren Randolph for West Ham – but some of his biggest name club counterparts were clearly enduring worse and having already lost Séamus Coleman, the Dubliner was probably happy enough to see his first choice right back sitting safely on the bench as his side embarrassed Manchester United at Old Trafford.

Saturday’s setbacks had included calls from clubs to confirm that Coleman, Darragh Lenihan and Harry Arter were all injured. Cyrus Christie and Kevin Long have been drafted in to replace the first two while the midfielder’s fitness will be assessed over the course of Monday with the squad due to train for the first time due to the staggered Premier League fixture list and more limited than usual flight options from Britain into Dublin.

Coleman had made such a strong start with Everton to the new season that Kenny’s decision to drop him for the games against Bulgaria and Finland may well have been the subject of renewed consideration.

Whatever about the play-off game in Bratislava on Thursday, indeed, it actually seemed likely that he would feature in at least one of the Nations League matches but the Donegalman will now miss all three of games this month after having limped out of the 4-2 defeat of Brighton with a hamstring injury.

“It’s disappointing,” said Kenny on Sunday afternoon. “He has been in very good form and was having an exceptional game but it’s not something you can run off. If you’ve got a tear, you’ve got a tear.

“He was disappointed,” said the Dubliner, having spoken to the Ireland captain. “He’s knows that it’s an important game and he doesn’t want to miss out on it but there’s nothing we can do except to prepare for Slovakia and make sure we are right for that.”

Darragh Lenihan misses out too but Kenny remains positive about the prospects of Callum O’Dowda being in contention to start on Thursday and the possibility of Robbie Brady featuring too, certainly over the 10 days. Both had been injured, with groin and rib problems respectively, but made it as far as the bench for their clubs over the weekend.

“O’Dowda’s a very fit lad and he’s back training fully since the previous Saturday,” said Kenny. “He didn’t get back into the Bristol City side, they are top of the Championship and won the four games so he didn’t get in at the weekend, but he’s had a full week’s training at full tilt and he will train with us over the next few days.

“Robbie’s in a different situation, we’re trying to get him fit. We will have to review him but I am sure he is champing at the bit; I am sure he wants to go and contribute. They are both in consideration for selection.”

Shamrock Rovers’ Jack Byrne, who came off against Sligo Rovers on Friday night is, it seems, fine too but Kenny played down any notion that the 24 -year-old might have made any great strides up the international pecking order after a night in which he again scored and also attracted a lot of positive attention for the quality of one of his assists.

“Jack is in the squad on merit because he has played very well,” said the manager, “[but] we have some good passers. James McCarthy and Conor Hourihane are very creative passers. It’s important that we don’t create the impression that some players can do one thing and not the other.”

McCarthy struggled to live up to that particular billing in Sofia but Kenny suggested that the general assessment he and his staff have made since of the two September games has been broadly positive even if, he readily acknowledged, more end product would have been expected given the amount of possession the team managed.

He expects his side to be better now that the players have club games under their belts but Slovakia away should, on paper, be significantly tougher than Finland or Bulgaria. He is, in any case, going there with positive intentions.

“We respect Slovakia,” he says, “they have some terrific players but rather than go with a game-plan to try and nick a win, I think we’ve actually got to go and be progressive in the way we’re playing and try to win the game.”