Manchester United manager Jose Mourinho says that he believes his side can still qualify for next year's Champions League, defeat to Liverpool has left Manchester United 11 points off the qualification places. Video: Perform Group/Reuters 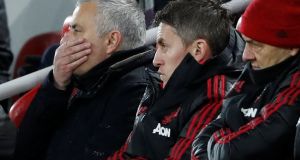 Nine months have passed since Sevilla knocked Manchester United out of the Champions League, when the Spanish club’s Danish defender Simon Kjaer gave the most perceptive and withering assessment of what José Mourinho’s team were all about: “We knew that with Fellaini and Lukaku they will always have chances from . . . how do you say that in English . . . coincidences.”

Coincidence football – kick and rush, hit and hope, close your eyes and pray. There was a period at Anfield last night when it looked as though the football of coincidences might get United through. It doesn’t always matter if the other team is dominating the match – there’s always a chance their keeper might drop one on your striker’s foot.

But it usually matters. As one of those old American sportswriters used to say, the race is not always to the swift, nor the battle to the strong, but that’s the way to bet. When one team has 36 attempts on goal and the other only six, there’s more chance of the first team benefiting from a couple of lucky deflections.

When Mourinho was asked afterwards on Sky if his players were still playing for him, he tried to turn it into a word game. “What is that? Play for me? Are you calling the players dishonest?”

According to this latest Mourinho rhetoric, the honest player gives 100 per cent every time they take the field while only the dishonest player gives less, regardless of who happens to be standing in the dugout. If that is true you have to wonder how managers like Mourinho can get clubs to pay them £15 million a year. You can tell he must be pretty desperate if he’s had to resort to such a manager-minimising line of argument.

But of course, his talk about honest and dishonest players should not be taken as a sincere pronouncement about how football works. It’s a tactical device meant to create confusion and divert attention away from himself. It’s not that Manchester United’s players didn’t try: in a game like that every player is trying. It’s that, as usual under Mourinho, they went out with no real idea of how they were going to win the game.

The key to understanding Mourinho is that there is no other top manager who has such a terror of losing. The terror conditions his approach to every big match, and means that this approach will always be risk-averse and safety-first. If his team wins on a coincidence then so much the better, but if the coincidences don’t go their way that’s okay as long as they do not lose.

The terror might seem like an unusual psychological quirk, until you realise that it is the logical culmination of an ultra-cynical approach to the game that focuses only on the result at the expense of everything else. The terror is where you end up when you regard the performance – that is, the actual football – as something that could interest only the “Einsteins”, the “poets”, and other such dreamers and frauds.

But while Mourinho is only thinking about the scoreboard, the players also have to think about how to get through the 90 minutes of the match, and here they get very little help from Mourinho.

He has been at Manchester United for two-and-a-half years and there is still no sign of a football identity – of the kind that rivals such as Jurgen Klopp, Pep Guardiola, Mauricio Pochettino and Maurizio Sarri had managed to imprint on their teams within at most a few months of their arrival. These managers do tactics, Mourinho specialises in drama.

At Chelsea they argue over whether Hazard should play up front or out wide, at Liverpool they squabble over which combination offers the best balance in midfield. At United the argument always seems to be about which player just got thrown under the bus, and whether they deserved it or not. The fact that a significant section of the Manchester United crowd seems to have turned on their best player, Paul Pogba, is a sad testament to how effective Mourinho’s dramatic distractions can be.

The worst thing about this mess from Manchester United’s point of view is that, right now, Mourinho is exactly the manager they deserve. His results-only approach is mirrored in the boardroom, where the leading director, Ed Woodward, is also judged on outcomes and not processes. Woodward’s employers don’t ask: “Is the club doing better this year than last year?” They ask: “Did we make more money this year than we did last year?” As long as the answer to this second question is yes, then Woodward has nothing to worry about.

The big threat to the bottom line at United is failure to qualify for the Champions League – not just because they lose out on participation money, but also because their big sponsorship contracts pay less if they don’t qualify. Right now it looks like the only feasible way back into next year’s Champions League is to win it this year, and that does not look likely.

The heat is therefore on Woodward, but at the moment Mourinho has one thing still going for him. The main reason why Louis van Gaal – a process-focused manager – lost his job immediately after winning the FA Cup was that Mourinho the superstar was available to replace him.

Currently there is no obvious candidate to replace Mourinho – and remember, the candidate has to be very obvious for outcomes-focused directors like Woodward to notice them. This is not a board that is about to take a risk on a lesser-known coach simply because their team plays great football: United’s directors are blind to things like that.

They could perhaps give Michael Carrick the job on a caretaker basis, in the vague hope of unearthing a home-grown Guardiola – but they lack the football insight to form a credible judgment of Carrick’s potential. Hiring him would be a shot in the dark. What they want more than anything is a big box-office name, preferably one big enough for a couple of directors to hide behind.

But right now all the managerial superstars are spoken for, so the loveless embrace with Mourinho could go on for a while yet.

1 Ireland to stick with winning formula against England
2 Mourinho expects Son to miss rest of the season
3 Gerry Thornley: England primed to show their best against Ireland
4 Wales cry foul over Furlong’s scrum technique
5 Lewis Ludlam eager to make his presence felt for England
Real news has value SUBSCRIBE
Crossword Get access to over 6,000 interactive crosswords