For Liverpool, the need to win every game to cling on to Guardiola’s leaders is wearying 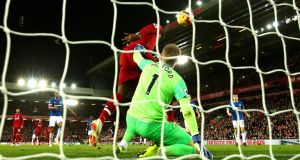 Marco Silva said it after the game: the great thing about football is it always shows you something new. The 55,000 people at Anfield must have seen untold millions of goals between them, but hardly any of them will ever have seen anything quite like that.

For Everton it was the most horrible football injustice imaginable after a match that had promised so much. Remember, it was only in January that then Everton manager Sam Allardyce appalled his own fans by announcing in a BBC interview moments before an FA Cup tie at Anfield: “The one thing we won’t be doing is playing open, expansive football.” Know your place, was Allardyce’s message to Everton fans.

A few months after Everton’s board decided to replace Allardyce, Marco Silva has proven how crucial a decision that was by rapidly putting together the best Everton side since the 1980s. It’s remarkable what can be achieved with a few good signings, some good work on the training ground and an unwillingness to embrace mediocrity. Everton proved they now have a team capable of going toe-to-toe with Liverpool at Anfield and having the better of the chances. It may not be much consolation after losing the derby in such sickening circumstances, but they can be more proud of their defeat yesterday than of last season’s park-the-bus Premier League draw at the same venue. At least now they have hope.

Divock Origi’s winner meant that Liverpool’s best-ever start to a Premier League season is still good enough for them to cling to a few shreds of hope. Sky put it to Jürgen Klopp after the game that the win had been all the more vital because of the pace being set by Manchester City.

Klopp’s smile faded for the first time in the interview, and he muttered some stuff about how you can’t afford to think that way, before saying: “I think today nobody thought about the situation in the table or whatever, they only wanted to win that game, you saw it from the first to the last second ... ”

More than a win

Klopp’s own reaction and that of everyone else in the stadium had given the lie to that. A late, lucky winning goal always feels good, but this was more than just that. Origi’s goal had rescued the season – at least until Wednesday, when Liverpool will have to win again.

Back in 2012, when Pep Guardiola’s Barcelona and José Mourinho’s Real Madrid were fighting for the Spanish title, Sid Lowe wrote that in La Liga, “draws are the new defeats”. La Liga is no longer like that: Barcelona currently lead the table having won only eight games out of 14. Instead the Premier League has become the league where you have to win pretty much every match to be considered a title contender. While Barcelona lead La Liga with 28 points, there are five Premier League teams on 30 points or more after their first 14 matches, and three of those teams can be backed to win the league at odds of greater than 50/1.

The common factor is, of course, Guardiola, who has created the same kind of relentless winning machine at City that he oversaw at Barcelona and Bayern. Right now it seems that whatever the question opponents ask, City will find the answer somewhere, and they will find it with plenty of time and a couple of goals to spare. Liverpool are hanging on, but the goals-scored column looks ominous for them: City have 43, Liverpool just 27. And City have done this even though their best player last season, Kevin de Bruyne, has missed most of this season through injury.

The remarkable thing at this point is that the illusion of a race still exists. City’s dominance is intimidating and inhibiting for the challengers. When something goes wrong in a game, it is not simply a game at stake; one setback threatens to ruin the work of an entire season.

Look at the tension and anxiety of the Spurs players yesterday afternoon as Arsenal fought back in the second half. The Emirates was already a tough place for them to be, but City’s shadow made it even colder and less forgiving. The same thing was evident in the frustration of Liverpool’s players as the final whistle approached at Anfield.

The question is whether Origi’s winner can change Liverpool from “doubters to believers”, in Klopp’s phrase. Most teams that go on to achieve something great can look back and remember a similar moment. Think of Cristiano Ronaldo’s winner for Manchester United at Fulham in 2007, or Andrés Iniesta’s equaliser for Barcelona at Chelsea in the 2009 Champions League semi-final. At City, Guardiola has often referred to Raheem Sterling’s 96th-minute winner against Southampton in November last year. These were the turning points when their teams started to believe they were destined for glory.

The thing is, Origi’s goal was arguably the third such moment Liverpool have had already this season, and they have not yet reached the halfway point. There is also Daniel Sturridge’s implausible late equaliser at Chelsea and Riyad Mahrez’s late penalty miss at Anfield – neither of those dramatic late escapes had any obvious galvanising effect, and this sort of luck cannot possibly last.

There is clearly room for improvement. Last season Liverpool’s front three scored 91 goals in 56 matches, or 1.62 goals per game. This season their scoring rate is down by more than a third, to 21 in 20, or 1.05 per game. It was always to be expected that Mohamed Salah would struggle to match last season’s phenomenal goal tally, but Roberto Firmino is also scoring only about half as often as he did last year, and if Liverpool are going to stay close to City this will have to change.

Part of the problem is that Liverpool’s success last season was so conspicuous that opponents have changed the way they play against them. Nobody is leaving space in behind, as Roma notoriously did in the Champions League semi-final at Anfield. Klopp has tweaked the tactics, moving Salah up front and Firmino to the wing or deeper into midfield, but the basic problem remains: Liverpool’s midfield is having to work much harder to unpick massed defences, and the Milner-Henderson-Wijnaldum combination they often end up with is worryingly one-paced.

Klopp foresaw the problem, which is why he tried to sign Nabil Fekir in addition to Naby Keïta and Fabinho, but Fekir’s signing was over-ruled by the medical department, Keïta has struggled with injury and Fabinho’s performances so far have divided opinion.

If Liverpool are going to keep the title race going into 2019, then Keïta will have to recapture the form he showed at RB Leipzig, starting this week. Failing that, Klopp can only hope that Origi’s goal turns out to be one of those moments that inspires a group of players to believe, despite a paucity of evidence, that this really is their year.

1 Dan Tuohy explains ‘rotten to the core’ comments
2 Six Nations: No place to hide for Ireland’s misfiring captain
3 Contepomi says Leinster can learn lessons from nature of Ireland’s defeat
4 England 24 Ireland 12: How the Irish players rated at Twickenham
5 Lampard warns Chelsea to be fully focused for Bayern test
Real news has value SUBSCRIBE
Crossword Get access to over 6,000 interactive crosswords