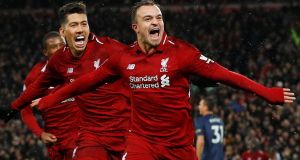 Perhaps it was appropriate that José Mourinho and his players stayed at a hotel named after the Titanic. Fill in your own jokes here. This victory moves Liverpool 19 points clear of Manchester United, with not even half a season played, and returns Jürgen Klopp’s team to the top of the Premier League in a title race where their arch-rivals can barely be considered even an afterthought.

For all the historic rivalry of this fixture, it is the other team from the other end of East Lancs Road that should be uppermost in Liverpool’s thoughts now. Liverpool versus Manchester City is all that matters now. And United? They are barely a speck in the distance. Mourinho’s team have conceded more goals by mid-December than they did throughout the whole of last season and, for a club with United’s ambitions, it is difficult to shake the feeling that their manager could pay the price with his job. At any of his previous clubs, it would probably have happened already.

Liverpool, meanwhile, remain the only unbeaten side in the top division. They were fortunate in one respect that Xherdan Shaqiri’s second-half goals both took decisive deflections before beating David de Gea. Overall, however, who could say they were lucky given the balance of play, the long spells when they pinned back their opponents and the overwhelming sense that if it was not for a dreadful mistake from Alisson, Liverpool’s goalkeeper, the home team might have made it an even more straightforward victory.

Sadio Mané’s 24th-minute goal had given Liverpool a 1-0 lead before Alisson’s unexpected faux pas allowed Jesse Lingard to steal in for an equaliser that changed the complexion of the match.

At 1-1 there was a 25-minute period when Liverpool looked unusually short of ideas. But it was an attacking move from Klopp to take off Naby Keita and replace him with Shaqiri in the 70th minute. Shaqiri scored twice within 10 minutes and Mourinho had to spend the remainder of the game listening to the hitlist of a gloating crowd. They weren’t kind, “Don’t sack Mourinho” being the pick of the bunch – heavy on irony, with Ed Woodward, Sir Bobby Charlton and Alex Ferguson watching on, grim-faced, from the VIP seats.

The speed of the game was incredible and that, for Liverpool, was just how they would have wanted it. Pep Guardiola made this point when Manchester City visited this stadium earlier in the season: Liverpool can swamp opponents when the game is this frenetic. It was a blur at times, particularly in those frantic early exchanges when there was barely time to analyse some of the incidents. The saves from De Gea, the penalty-box pinball, the goal-line clearance, the shots that flew left, right and high of United’s goal. After 19 minutes there had been 10 attempts at goal, nine for Liverpool. De Gea could be seen pleading with his team-mates to calm down. But the visiting players were rushing their passes, falling into the trap, making it the game Liverpool wanted it to be.

If we are going to be generous, this was not one of those occasions when United could be accused of failing to comprehend what it means to wear their team’s shirt. One tackle from Ashley Young must have left Mohamed Salah’s bones vibrating. The problem for the away side boiled down to something else: an imbalance of talent. In the next piece of action, Liverpool had moved the ball infield, left to right, until Fabinho was in possession 30 yards from goal. The pass he clipped into the penalty area was weighted beautifully to find Mané. Young had let him go and Mané took his goal with such expertise, controlling the ball on his chest and volleying a left-footed shot past De Gea, it felt barely conceivable to remember all those chances he passed up in Liverpool’s previous game against Napoli.

If Liverpool had kept a clean sheet, they would have established a new record for the 17-game mark of the Premier League era. Instead, the manner of the equaliser will pain a team that had previously conceded only six league goals. Alisson had both hands on the ball when he went down to collect Romelu Lukaku’s waist-high cross. What he could not do was get a firm grip of it, the ball came down on to his knee and suddenly it had squirted away from him. Lingard was sliding in, anticipating something might happen, making sure he got there first and scuffing his shot beyond the goalkeeper. The ball was in the net and, for Liverpool, that moment could probably be summed up by the sight of Virgil van Dijk’s immediate reaction, doubled over in disbelief, both hands covering his face.

It took a while for Liverpool to shake their heads clear and Mourinho could certainly be encouraged during the early parts of the second half by the sight of Nathaniel Clyne, then Dejan Lovren and, Van Dijk all taking aim at goal from long distance. Again, Klopp’s team were pushing their opponents back but, for a while, they found it hard work to get behind the opposition defence. At one point, Salah could even be seen miscuing a corner and a huge sigh reverberated off the Kop.

Shaqiri’s arrival was decisive. His first goal went in off Young, via the underside of the crossbar, after Mané had beaten Ander Herrera to create the chance. The next one flicked off Eric Bailly to fly past De Gea from 20 yards and, amid all this, a penny for Paul Pogba’s thoughts? Once again there was no place for a World Cup winner in Mourinho’s starting lineup and when United needed some inspiration he remained on the bench. Liverpool can forget the team from Old Trafford now and that, more than anything, must cut United deeply.