Champions League last-16: Who’s in and who can they play? 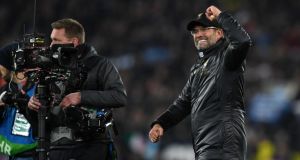 The Premier League will supply a quarter of the teams in the Champions League last-16 draw, which will take place at 11am on Monday. Teams from the same country cannot be drawn against each other, and likewise teams who qualified from the same group. Group winners will be drawn against second-placed teams, with the top seed enjoying home advantage in the second leg. VAR will be used for the rest of the competition.

Borussia Dortmund Beat a poor Monaco side to top Group A. Lucien Favre’s team thumped second-placed Atlético 4-0 in Germany but lost 2-0 in Madrid – their only defeat so far this season. BVB lead the Bundesliga by seven points after beating their Ruhr derby rivals Schalke at the weekend.

Barcelona Have reached the last 16 for a record 12th season in a row, clinching first place in Group B with a 2-1 success at PSV Eindhoven before the 1-1 draw with Tottenham at the Camp Nou. The La Liga frontrunners remain unbeaten at home in 29 Champions League ties, a run that started way back in September 2013.

Paris Saint-Germain Have qualified for the knockout stages for the past seven seasons and are having a prolific campaign. Their 70 goals in all competitions are more than any other team in Europe’s big five leagues. Manchester City rank next on 68.

Porto The current Primeira Liga leaders won five Champions League games in a row to top Group D and are victorious in their last 12 matches in all competitions. The 27-year-old Malian striker Moussa Marega has been key to Porto’s success, scoring six times en route to the last 16.

Bayern Munich Drew 3-3 at Ajax to secure top spot in Group E and have gone on to the quarter-finals or better in each of the past seven seasons. Domestically the Bavarians have been poor under Niko Kovac and sit third in the Bundesliga table, nine points behind Borussia Dortmund.

Manchester City Had a poor start, losing 2-1 at home to Lyon, but quickly gained momentum and sealed their place in the last 16 with a game to spare with the 2-2 draw in France. The 6-0 defeat of Shakhtar was City’s biggest win in European competition. Pep Guardiola’s side suffered their first Premier League defeat of the season on Saturday, going down 2-0 at Chelsea, but are just a point behind the leaders Liverpool. Possible opponents: Atlético Madrid, Schalke, Ajax, Roma.

Real Madrid Lost twice in the group stages, CSKA Moscow having completed the double over the European champions with Wednesday’s 3-0 win at the Bernabéu. Santiago Solari’s side still topped Group B with a game to spare, though, and a 2-0 victory at Roma showed they remain a force to be reckoned with. Their record is formidable: they have lost only six of their last 38 European matches.

Juventus Manchester United’s 2-1 win in Turin meant Juve had to wait until their penultimate fixture to progress. A 1-0 win at home to Valencia ensured the Italians have not failed to reach the last 16 since 2013-14 and they lead Serie A by eight points but they lost their final group game at Young Boys.

Atlético Madrid Sealed their place in the round of 16 with a match to spare by beating Monaco but missed the chance to top their group after drawing 0-0 at Club Brugge on Tuesday. Diego Simeone’s side have reached two Champions League and three Europa League finals in the last nine seasons and sit third in La Liga.

Tottenham Spurs would be the first to admit their good fortune in reaching the last 16 after a poor start, losing 2-1 at Internazionale and being thumped 4-2 by Barcelona at Wembley. But PSV and Inter were beaten at home and then came that 1-1 draw at Barça. They are third in the Premier League and there is belief in the Spurs camp that this could be their year in Europe. Possible opponents: Borussia Dortmund, Paris Saint-Germain, Porto, Bayern Munich, Real Madrid, Juventus.

Schalke Semi-finalists in 2011, Schalke’s last three Champions League campaigns have all ended at the last 16 stage. Domenico Tedesco’s side are 13th in the Bundesliga, with 14 points from 14 games, but seemed to have saved their best for Europe this season.

Ajax The Dutch giants are in the last 16 for the first time since 2005-06 and are unbeaten in Europe this season. Drew home and away against Bayern and took four points off Benfica in Group E. They are currently second in the Eredivisie, two points behind PSV and five ahead of Feyenoord, having won 13 of their 15 games.

Lyon Nabil Fekir’s equaliser at Shakhtar secured qualification for Bruno Génésio’s side, who beat Manchester City at the Etihad in their opening game before drawing all their remaining matches. They sit a disappointing fourth in Ligue 1 but have lost only once in their last 10 European matches before last night.

Roma Last season’s semi-finalists have reached the last 16 for the fourth time in five years. They recorded three successive European victories for the first time since December 2009 but lost at Viktoria Plzen on Wednesday and are struggling in Serie A, sitting in eighth place with only five wins in 15 games.

Manchester United They may be struggling domestically but in Europe United have shown some fortitude, at least until Wednesday’s feeble defeat at Valencia. The 2-1 comeback victory at Juventus was the highlight of their Group H campaign but their form is still patchy at best. Possible opponents: Borussia Dortmund, Barcelona, Paris Saint-Germain, Porto, Bayern Munich, Real Madrid.