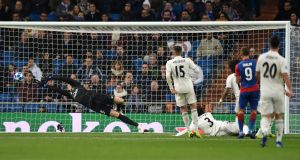 Already secured of a place in the last 16 at top of Group G, head coach Santiago Solari opted to rotate the team, as both Luka Modric and Gareth Bale started on the bench.

The decision backfired as the European champions found themselves behind in the 37th minute when Fedor Chalov put the Russians in front.

Georgy Schennikov volleyed home a second just before half-time, with Icelandic 19-year-old Arnor Sigurdsson wrapping up a famous victory in the 73rd minute.

It was a heaviest home European loss for Real Madrid, while CSKA Moscow – who also beat the Spaniards in Russia – equalled the highest points tally for a team finishing bottom of their group.

In the other Group G fixture, Viktoria Plzen beat Roma 2-1, which was enough to secure their place in the Europa League.

Jan Kovarik put the Czech side ahead on the hour mark before Cengiz Under soon equalised.

However, Tomas Chory headed in the winning goal with 18 minutes left.

Roma finished with 10 men after Luca Pellegrini, on as a late substitute, picked up two late cautions.

In Group E, Ajax and Bayern Munich shared a drama-filled 3-3 draw at the Amsterdam Arena, both teams finishing with 10 men as the Germans secured top spot.

Robert Lewandowski put the visitors ahead in the 13th minute. Just after the hour mark, former Southampton midfielder Dusan Tadic levelled things up.

Ajax defender Maximilian Wober was shown a straight red card in the 67th minute after a professional foul on Leon Goretzka.

Thomas Müller followed him off with 15 minutes left for a challenge on Nicolas Tagliafico.

With eight minute left, Serbian Tadic converted a penalty, only for Bayern to produce a stunning late rally.

Lewandowski levelled things up at 2-2 with a penalty of his own on 87 minutes, before substitute Kingsley Coman curled in a dramatic late effort.

Ajax, though, made sure of a point deep into stoppage time when Bayern defender Niklas Sule diverted a cross into his own net.

Benfica beat AEK Athens 1-0 at home with a late free-kick from Alex Grimaldo.

The Greek side, who finished bottom with no points, had midfielder Konstantinos Galanopoulos sent off for two quick yellow cards late on.

Lyon finished in second place behind Manchester City in Group F after a 1-1 draw away to Shakhtar Donetsk.

The Ukranian side, who finished third, went ahead after 22 minutes through Junior Moraes. Nabil Fekir drew the French club level in the 65th minute.