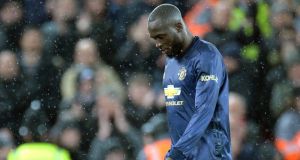 Manchester United’s Romelu Lukaku struggled to have any impact on the game at Anfield. Photograph: PA

With 10 minutes left at Anfield Romelu Lukaku set off on a dummy run towards the touchline , then turned to take the ball back from the player he imagined to be standing behind him. Except, that player was Virgil van Dijk who plays for Liverpool.

Lukaku stopped, looked baffled, almost seemed ready to scratch his head. They say the best players carry a picture around with them, a flashing radar screen of every other moving part on the pitch. On a cold, wet, merciless day at Anfield Lukaku seemed to be carrying a picture of something else altogether, a game of noughts and crosses perhaps or a hastily sketched pencil drawing of a hamster.

In the first half he completed one pass. He made one fine run down the flank to help set up United’s equaliser. Otherwise Lukaku was a No 9-shaped absence. Often the ball just seemed like an irritation, a side issue as he got on with the wider task of repeatedly bouncing off Van Dijk like a fly banging its head against a window pane.

And yet, while he was bad here, and has been bad for weeks, Lukaku is not the problem with this team. Like so many elements associated with Manchester United he has simply been deflated, all sense of joy and zest sucked from his game by the anti-chemistry of this grey regime, a player who has gained nothing, learned nothing, gone nowhere.

“Don’t sack Mourinho, don’t sack Mourinho”. By the end this was almost too much for the Anfield crowd, left drowning in honey by a late-breaking 3-1 win that returned Liverpool to the top of the table, left United’s season looking beached, and provided another near death-blow for a manager who had haunted this stadium ever since the last time Liverpool fancied themselves title contenders four years go, Demba Ba and all that.

They won’t sack Mourinho, not yet. That new contract will need paying up. Plus there is nowhere to go at this stage of the season, no obvious remedy. Not least when the entire club seems shot through with a sickness of the spirit that goes well beyond the head coach.

Liverpool are of course the main story here. Jürgen Klopp’s team were overwhelmingly superior. They had 36 shots at goal. They might have won by five goals. Klopp made a perfectly-judged substitution, bringing on Xherdan Shaqiri to take the game away. But still, somehow, Liverpool’s excellence was overshadowed by the sheer barren awfulness of their opponents.

United will continue to drift strangely, a vast, malfunctioning machine, clogged at every level

This was beyond dire - dire squared, dire football played in dire fashion by a dire selection. Imagine a bad plan, enacted badly, by someone not very good at enacting bad plans. Imagine a negative approach, applied with extreme negativity by a group of players feeling negative about the actual merits of all this negativity. Why would anyone want to keep doing this? Is Mourinho enjoying it? Even United’s starting XI was a deathly thing with seven of the 10 starting outfield players either defenders or defensive midfielders

And from the start Liverpool tore into those deep blue-grey shirts. Eric Bailly’s first significant act was to come charging forward out of defence and perform a kind of rugby spear-tackle on Firmino. For a while United looked like a massively hung-over pub team startled to find itself facing a group of peak-condition professionals. What’s the point of picking a tough, battling, muscular team if they get out-battled, out-muscled and out-toughed?

The goal was coming. You could hear it approaching, bells jingling, footsteps crunching. It arrived after Bailly had done something extraordinary, barrelling out of defence again. This time he reached the Liverpool half before hurling himself on to his back. Liverpool foraged down the left, and moments later Fabinho played a dreamy pass over the top for Sadio Mané to finish neatly. A José Mourinho team that can’t defend: what, exactly, is the point of this?

Meanwhile Lukaku continued to fret. Each time the ball approached he looked startled , waving a leg, running the other way, like a cat startled by a remote controlled toy on Christmas Day. But he was there to spin and sprint down the left flank and set up a close-range finish for Jesse Lingard.

For long periods the second half was a neck-cricking affair, all 20 outfield players dragged towards the United goal like snooker balls on a wonky table. United’s best attacking player Anthony Martial came on with 12 minutes to go. It seemed fitting the goal that re-established Liverpool’s lead should come with the help of four deflections, and Shaqiri’s decisive third via another.

Liverpool march on and will now face a vital couple of weeks in their pursuit of the league title. United will continue to drift strangely, a vast, malfunctioning machine, clogged at every level, and producing here a performance of such painful, fearful negativity it almost felt like a piece of doomed and terrifying art.

Mourinho afterwards confessed Manchester United could not cope with the intensity or physicality of Liverpool.

Mourinho claimed his squad contains too many injury-prone players and was therefore no match for the impressive qualities of Liverpool, a remarkable admission from a United manager.

Klopp described Liverpool’s opening 30 minutes as among the best performances of his tenure as his team replaced Manchester City at the top with a sixth consecutive league victory. United’s manager, too, was lavish in praise of Liverpool, albeit while highlighting the deficiencies in his squad, assembled at exorbitant cost and now 11 points off fourth place.

“The players gave everything and, when the players give everything, I am never frustrated towards them,” said Mourinho, who left Paul Pogba on the bench throughout. “They play in relation to their qualities, the same way Liverpool play in relation to their qualities. They [LIVERPOOL]are fast, they are intense, they are aggressive, they are physical, they are objective. They play 200 miles per hour with and without the ball. I am still tired just looking at [ANDY]Robertson. He makes 100-metre sprints every minute, absolutely incredible, and these are qualities.