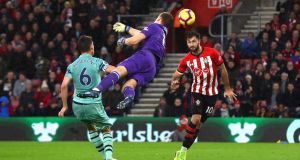 There is hope at St Mary’s. Southampton’s home has been a despondent place since the last time they won three points here, back in April, but at the final whistle of this pulsing victory over Arsenal they could be happy again. More tangibly, this was their first Premier League win since 1 September and hauls them out of the relegation zone – the new manager Ralph Hasenhüttl’s influence clearly evident in a vibrant display, capped by Charlie Austin’s winner five minutes from time.

For Arsenal, they might not cry themselves to sleep at a first defeat of any description since August, and a worsening defensive injury crisis may be more concerning. But the odd fact that they are yet to lead a Premier League game at half-time finally bit them here, in a performance that was curiously slack, without much of the dynamism and determination their opponents displayed.

From a neutral perspective, two goals from Danny Ings was the most heartening aspect: two horrible knee injuries sustained at Liverpool curtailed his career there, but at Southampton he looks reborn. “I don’t want to pick one player out – all the team was very good and very committed,” said Hasenhüttl. “But he was very intense and invested a lot, and when you invest a lot you earn a lot.”

His goals here mean he has six from 11 games in a side who have been broadly wretched all season: against Arsenal he showed what he could do with some decent service, heading home from a couple of perfect crosses after taking advantage of Arsenal’s bodged-together backline, at the heart of which was Laurent Koscielny.

It feels harsh to criticise Koscielny too much, given the Frenchman started with only 72 minutes of first-team football to his name since the achilles injury suffered against Atlético Madrid last season. It feels even harsher after the short film Arsenal put together about his recovery, displaying the ultimate mixed emotions as he watched France win the World Cup without him.

Were it not for injuries and suspensions elsewhere, Koscielny surely would not have started but his rustiness was exposed after losing track of Ings twice in the first half. For the first he and Granit Xhaka – playing at centre-back and proving that no matter how frustrating you find him in midfield, it is better than having him in defence – allowed Ings to have a free header, and for the second it was the third man in this makeshift back three, Stephan Lichtsteiner, who failed to cover the Liverpool loanee. Both times Ings punished the lapses with superb headers, one powerful and one high and looping.

Arsenal equalised twice through Henrikh Mkhitaryan, one terrific, one scrappy. The first came after a fine exchange between Alex Iwobi and Nacho Monreal allowed the Armenian to perfectly guide a header into the bottom corner; the second was extremely fortunate after his shot took a heavy deflection past a despairing Alex McCarthy.

After that, with Alexandre Lacazette introduced to join Pierre-Emerick Aubameyang up front, it felt almost inevitable that Arsenal would go on to win. But they struggled to create chances, and Mesut Özil’s arrival off the bench did not exactly give them the required spark: the German can be an easy target but he played here as if his feet were weighed down by sacks of sand.

Özil was not the man most to blame for Arsenal’s defeat, though. That makeshift defence, a half-fit Koscielny flanked by full-back Lichtsteiner and midfielder Xhaka, performed roughly as you might expect. The backline could become a significant concern for Unal Emery: Héctor Bellerín was forced off at half-time with a calf problem, and Lichtsteiner had to be withdrawn after a kick to his shins.

The immediate problem is who will play at the back against Tottenham in Wednesday’s Carabao Cup semi-final, but beyond that there may have to be some movement in the January transfer window, although Emery did not seem particularly optimistic. “Maybe we can think of something, but it’s not good for transfers in January,” he said.

Austin’s winner came five minutes from the end, as Bernd Leno misjudged a Shane Long cross and allowed it to drift to the back post. Austin was there to head into an empty net, and those inside St Mary’s felt something unusual: joy, relief, exhilaration, certainly one of the lesser-spotted positive emotions.

At the final whistle Hasenhüttl charged on to the pitch in celebration, briefly forgetting managerial protocol, but he can be forgiven for that. “It was very emotional. I have to apologise I didn’t shake Emery’s hand, but I had to run to my guys. We deserved to win today.” If this sort of performance becomes the rule rather than an exception for Southampton, we will be seeing plenty more of that.